This is the third year I’ve done a treasure hunt for World Domination Summit; the first time, I didn’t even have permission. I just crashed the registration party dressed as a superhero and started wrangling people into doing this crazy scavenger hunt across the city, and everybody had a great time.

After I blogged about it I sent a link to the WDS Adventure Czar and said, “Do you want me to do something like this again?” With permission this time, I did an Unconventional Treasure Hunt as part of the bigger Unconventional Race. They also gave me an official title: racemaster.

When given the chance to be the #superhero, always say #heckyeah! #wds2015

This year they wanted to re-use the 14-foot wooden globe that rotated on a pedestal onstage in previous years, and come up with some really innovative idea to involve it somehow in the Unconventional Race. It had been chopped into 140 pieces, and the poles of the globe (those six-sided stars pictured above and below) were really interesting. Starting from this concept, we made two games: the World Domination Scavenger Hunt and Bigger/Better.

How to Make a Scavenger Hunt

After five years of making treasure hunts in downtown Portland, I’ve learned that there are delicate layers of permission involved. The approval and support of the shopkeepers and employees who work near each of the landmarks is really helpful to put everything together, and making sure the clues don’t disappear. Getting the right people on my side was the second step.

The series of clues for the World Domination Scavenger Hunt linked 7 landmarks together in a chain. Every landmark had to be photographed, and uploaded to Twitter or Instagram with the hashtag #wdsrace.

Winner of the #wdsrace at #wds2015 will be first to find where I’ve hidden the pole to the WDS globe, and will get a free ticket to next year’s conference. A photo posted by Caelan Huntress (@caelanmac) on Jul 9, 2015 at 3:44pm PDT

The rules were kind of complicated, so I hung out at a table in the lobby and explained the rules to any curious people who came by to check it out. We also posted the rules at http://wds.fm/race, although they can only be viewed by attendees with WDS accounts. If you’re not one of those people, this is the spiel that I gave: 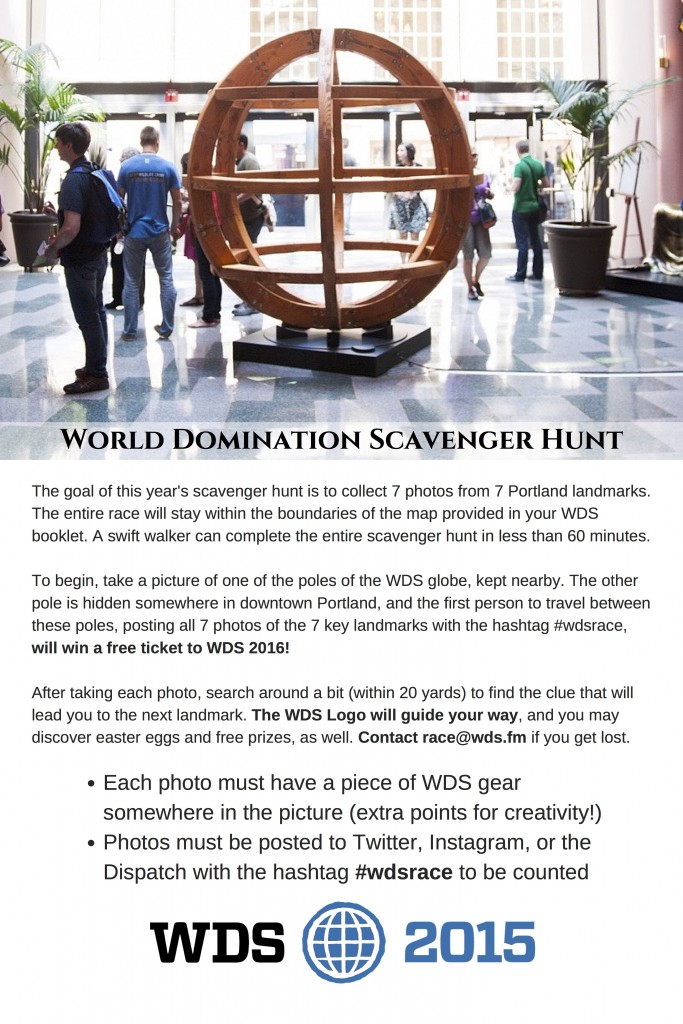 After taking a photo of each Portland landmark, and posting it with #wdsrace, participants would search around for the next clue, hidden somewhere nearby. Below I have listed all of the clues, along with the winning photos.

Museum Grounds is the name of a coffee shop at the Portland Art Museum, twenty feet away from this landmark. 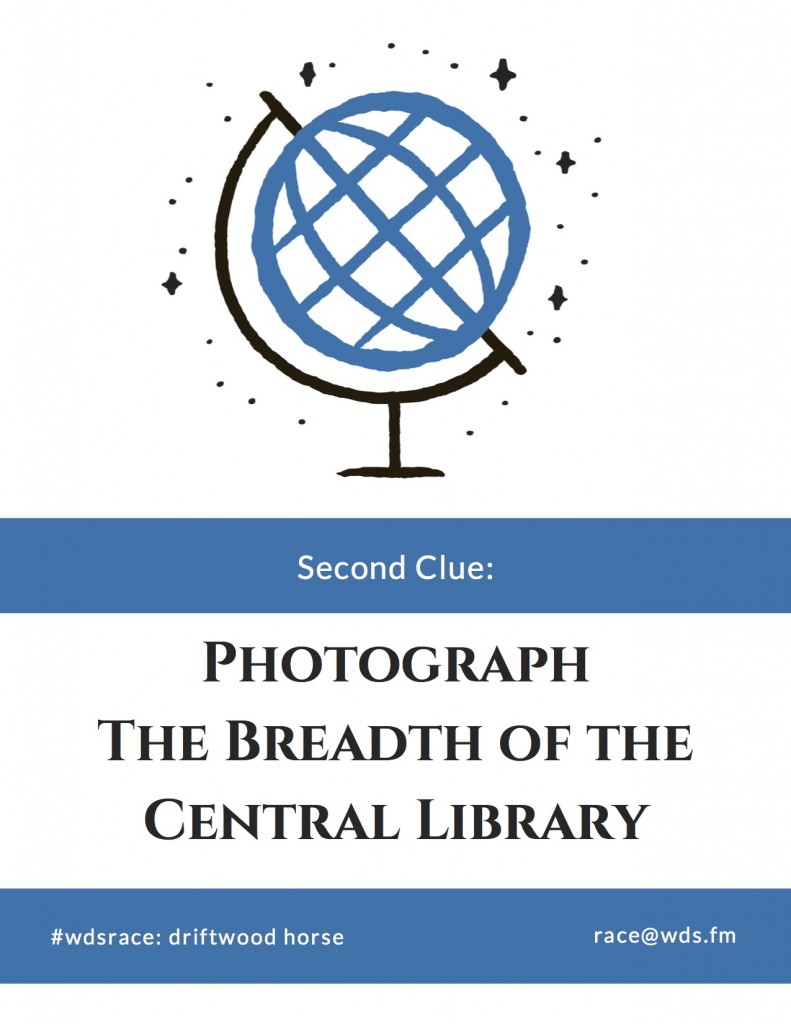 The next clue was sitting in the window of Crafty Wonderland, right behind the place where the photo is taken. 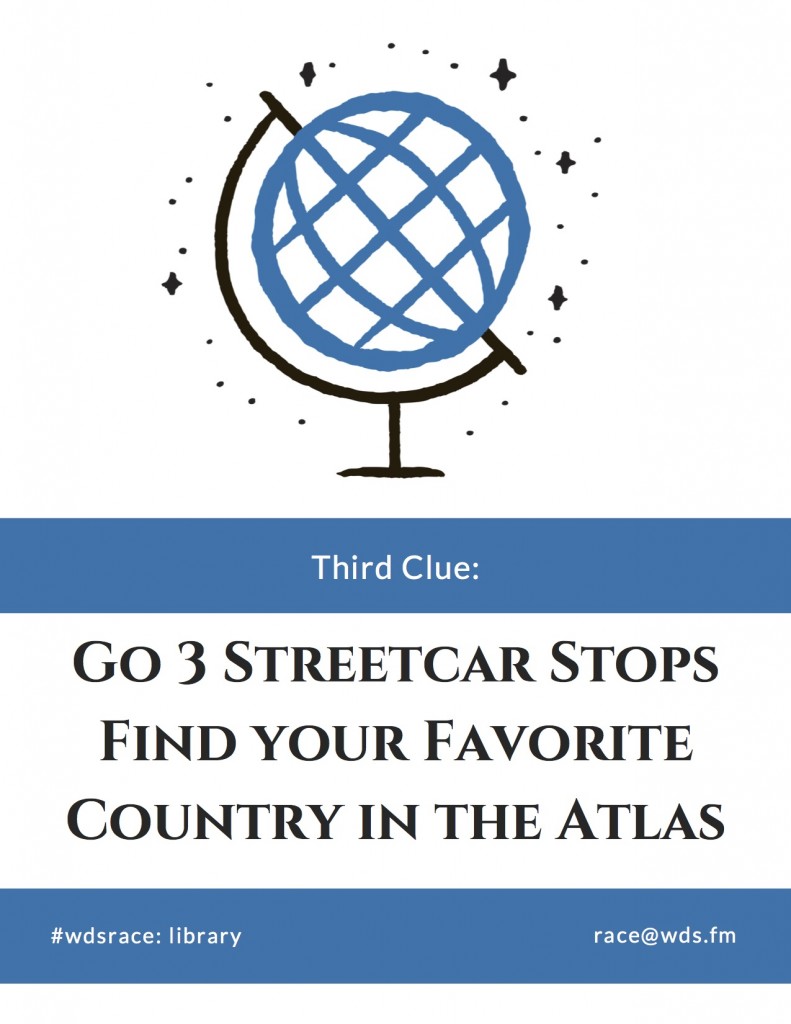 Redo for more #wds2015 swag — #wdsrace#CzechRepublic is our favorite country, because that’s where we met 🙂 pic.twitter.com/JIbeXxjzPE — Kristin Brethova (@KBrethova) July 11, 2015

This clue was hidden in Powell’s Bookstore in the Red Room. 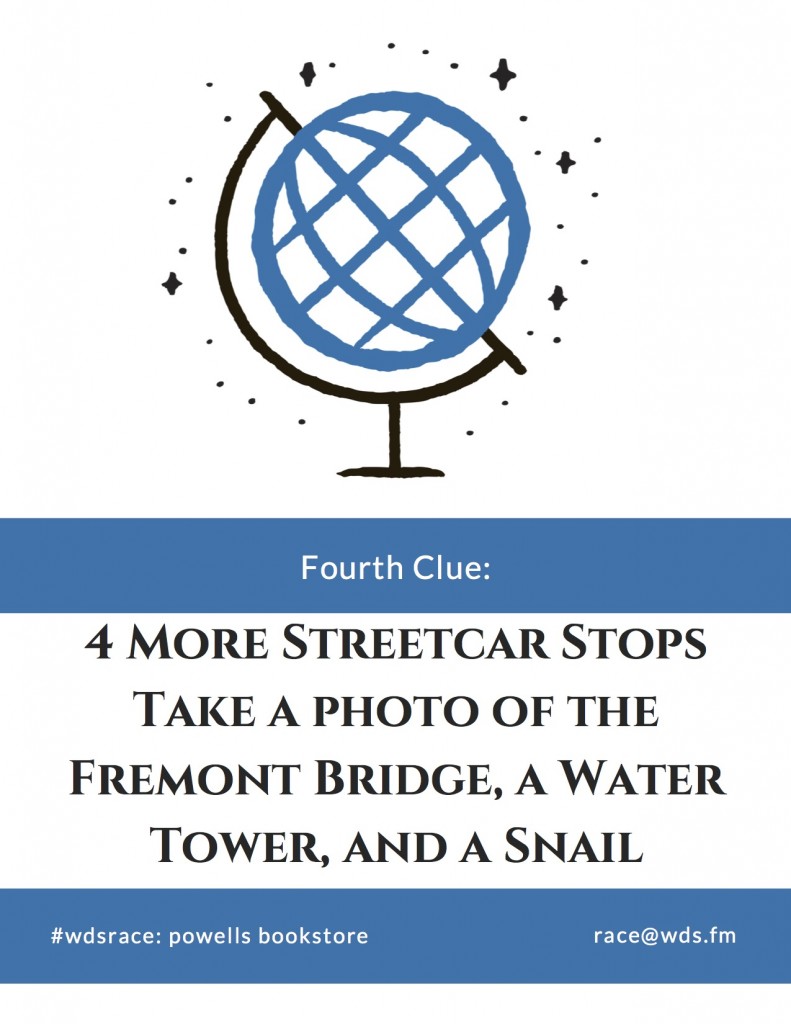 This clue was hanging in the window of Ovation coffee.

Taking 11 stops on the streetcar takes a long time – Kristin won because she saw the 11 stops went in a loop, and the next landmark was just blocks away. This final clue was hidden inside the bottom of the totem pole. 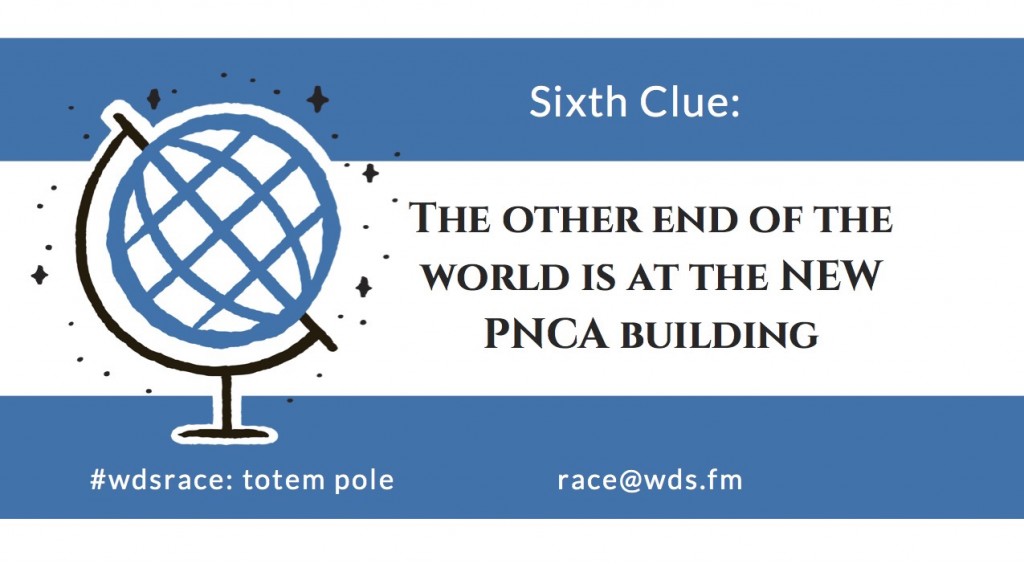 I was really happy that Kristin was first to find the pole, and won a free ticket to WDS 2016. She was actually one of the participants in my first WDS treasure hunt in 2013!

“This was way more fun than previous unconventional races; there were moments where I felt like I was competing on The Amazing Race. Thanks for making this experience awesome!” – Sebastian Mealer

While the scavenger hunt went between the two poles of the WDS globe, Bigger/Better (which was originally Jedd and Michelle’s fantastic idea) used all the pieces that bound the globe together. I liked this symbolically; because WDS isn’t really about the speakers, or the venue, or the swag – it is the people that make it such an amazing experience. 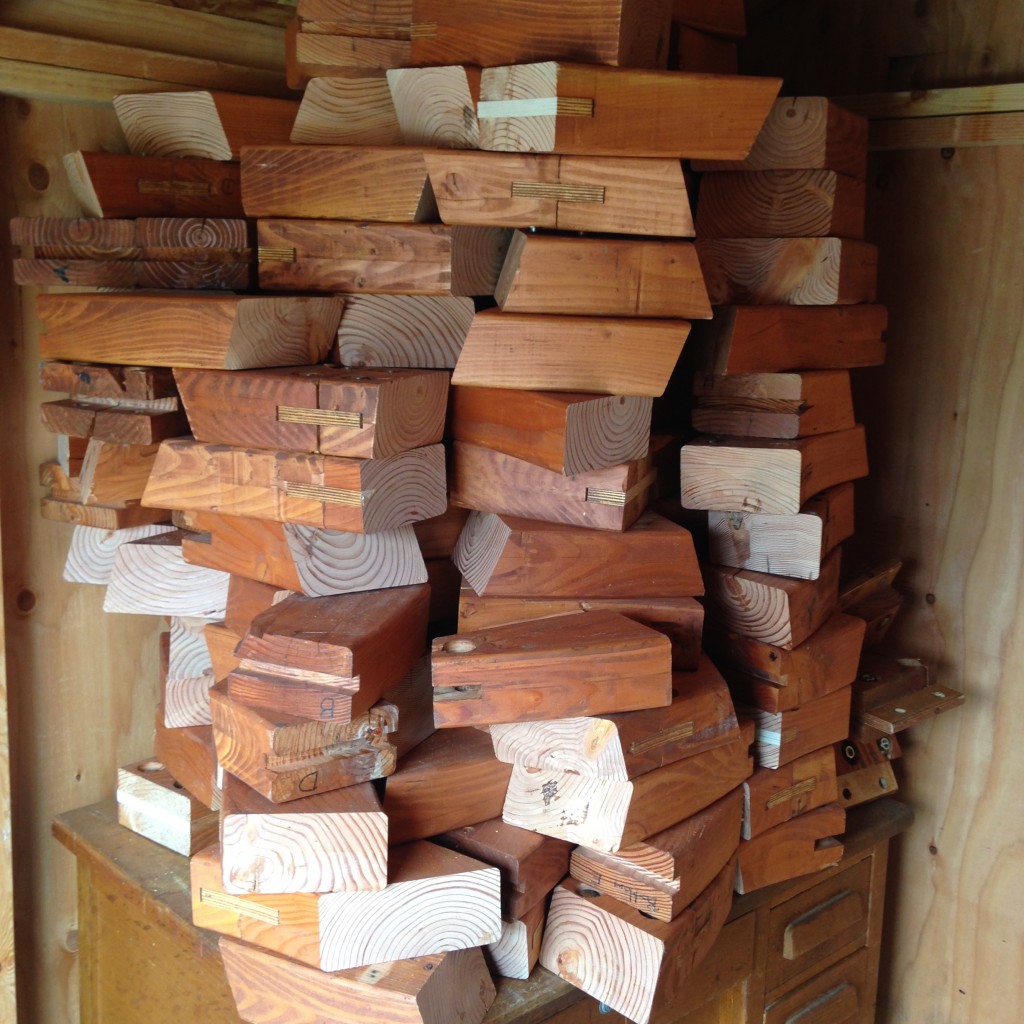 We had a lot of these.

Anybody could take one of the wooden pieces, and trade it to anyone else, for something that was bigger and/or better. The next item was then traded, for something bigger or better, and whoever had the biggest (or best) item at the end won a free ticket to next year’s conference. We asked everyone to document their trades by photographing both items traded, and upload them with #wdsrace. The winner traded up to a tea party in space!

Final prize. Getting to try out #OculusRift and have a tea party in space as a geek & adventurer: Priceless! #wdsracepic.twitter.com/FxyMv5BxMH — Elin Elkehag (@elkehag) July 12, 2015

There were some really imaginative ways to use the blocks.

And while she didn’t win, one of the most innovative trades by Sasha Martin ended up garnering thousands of donations to animal shelters.

Blown away! I’m amazed at how many animal lovers I met doing this project. So many kind hearts and bittersweet stories shared. And, perhaps best of all, $2,320 in written promises to help animal shelters all over the country and world (donations were even promised in Germany and Australia!). 🌏What a gift… All from a block of wood. This Bigger Better has been threefold: for the receiver of the notes, for the shelters, and for my daughter … I can’t wait to see her face when I tell her what the WDS community did in her and kitten’s honor. And did I tell you she had named the kitten Tuppence – from her favorite movie Mary Poppins?? Tears in my eyes. Such a brilliant, bittersweet, moment. 💝#wds2015 #WDSrace

Further Reading: My WDS Experience in 2015