For the World Domination Summit, I made an Unconventional Treasure Hunt at WDS 2014. It was a scavenger hunt of riddles throughout downtown Portland, each riddle leading to clues hidden in small treasure chests throughout the city. 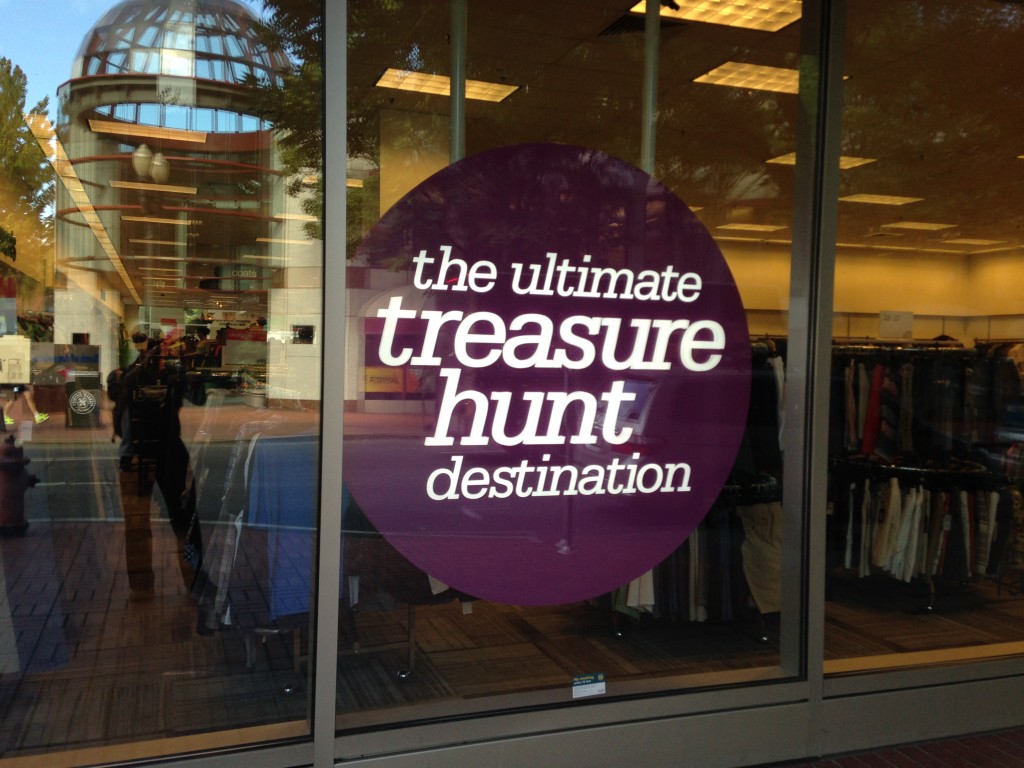 My passion for treasure hunts is pretty big. When I told the WDS Adventure Czar about my idea, he thought it was bizarre and crazy and fun, exactly the kind of adventure that WDS folks would love.

Did you participate in the Unconventional treasure Hunt at WDS2014? I’d love some feedback here.

It worked like this: There were 8 small treasure chests hidden in and around public landmarks. The clues were all printed on colored slips of paper, with a bunch of identical copies of each clue stuffed into a treasure chest at each location. Each clue gave an intersection, a set of GPS coordinates, and a clue for finding the next treasure chest. Their precise locations and clues are all listed below. 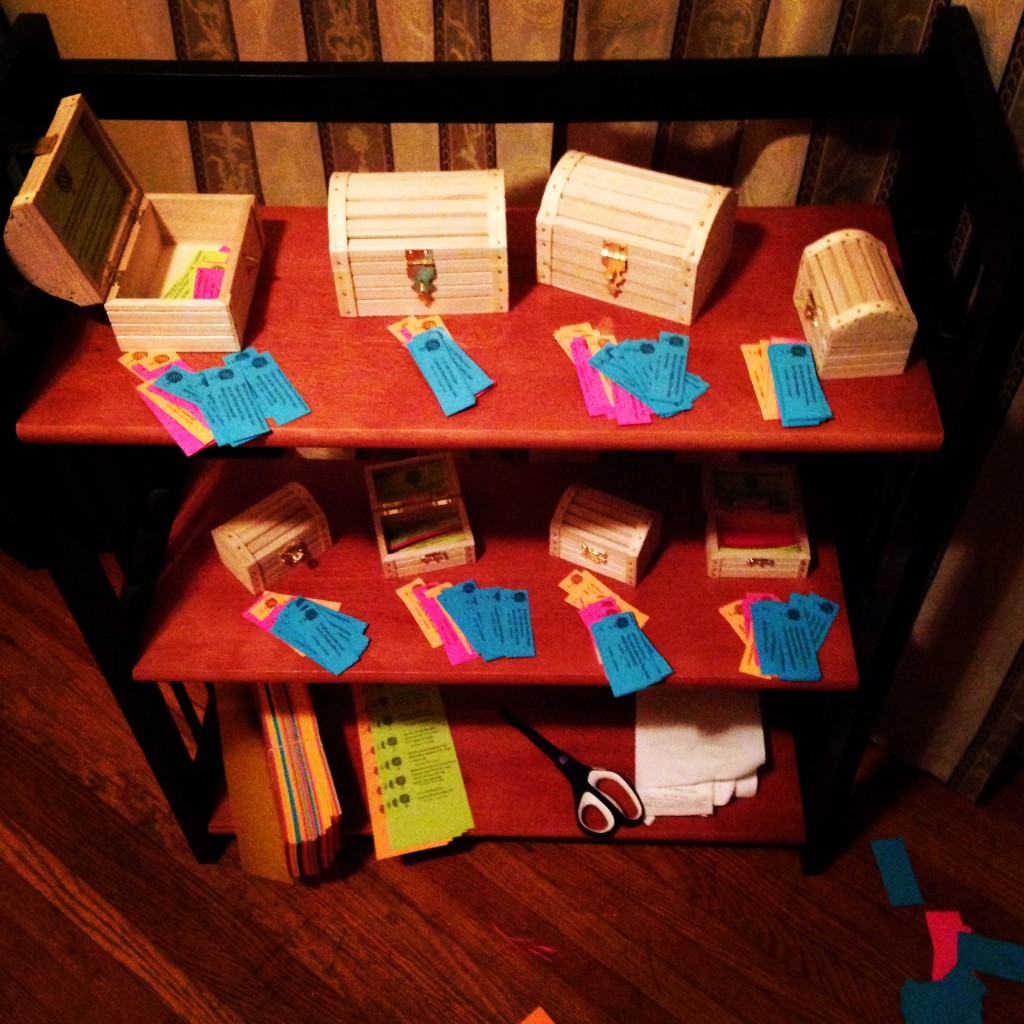 We incorporated it into the Unconventional Race, a smartphone-based scavenger hunt that happens alongside the WDS main event throughout the weekend. Lots of people were uploading photos of themselves doing kooky things that each awarded a few points, and the first to finish the Unconventional Treasure Hunt earned 150 points, a huge advantage in the main race.

The Winner of the Unconventional Race 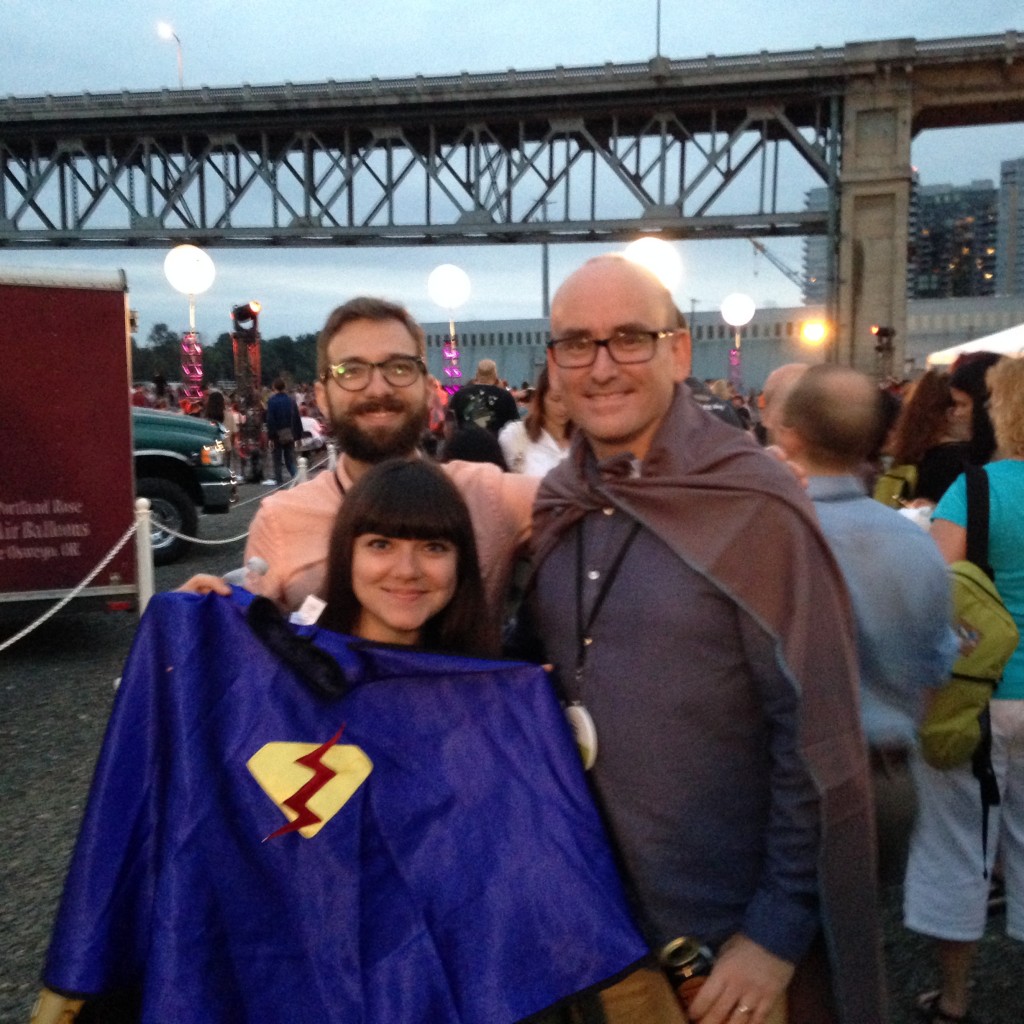 With Darren Rowse as sidekick

Starting the Unconventional Treasure Hunt was easy. The starting location was listed in the Unconventional Race app created by a badass web programmer: you go to the nearest frozen yogurt shop, and look for the treasure chest near the toppings. 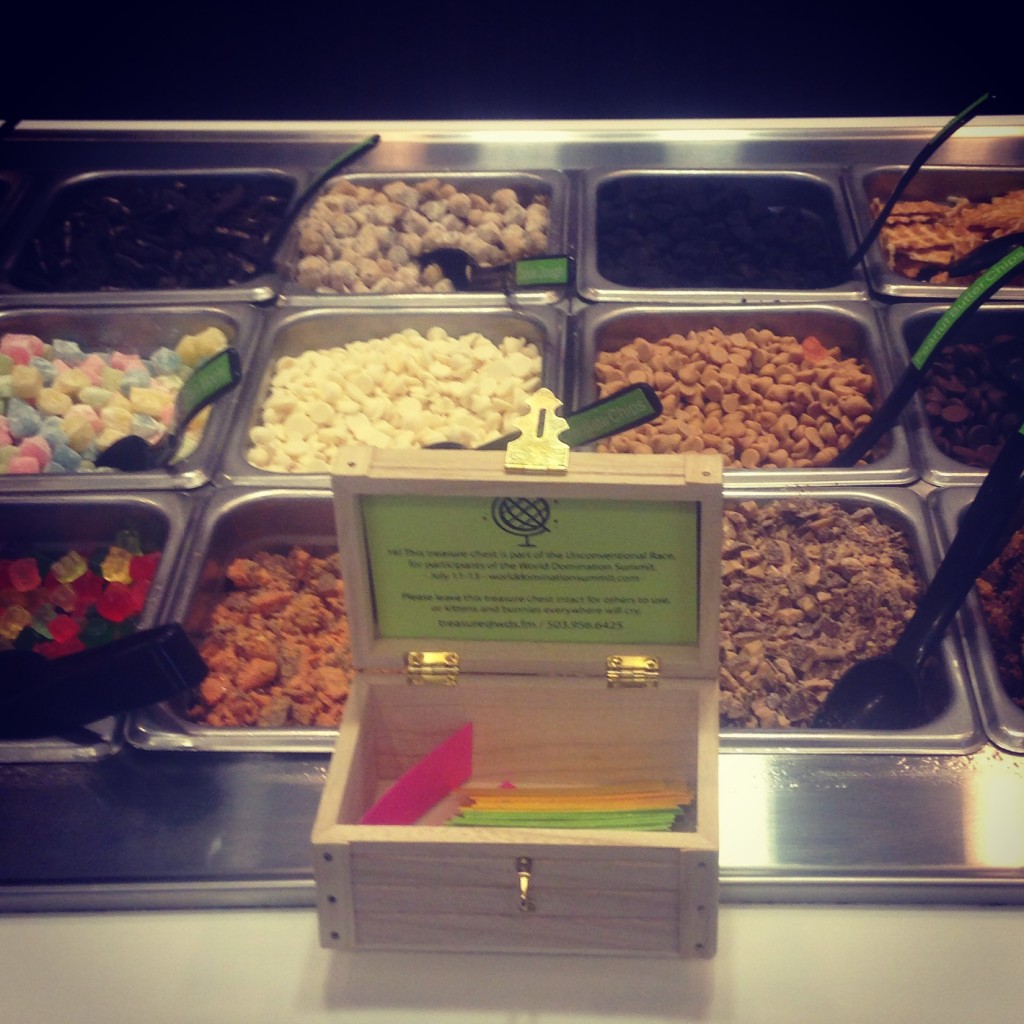 If you knew the city of Portland, you could walk to the intersection of 3rd and Clay. Or, if you’re really geeky, you could go to the precise location of the GPS co-ordinates.

Going this intersection lands you at Keller Fountain, a regular meeting place for my local Portland Parkour buddies. 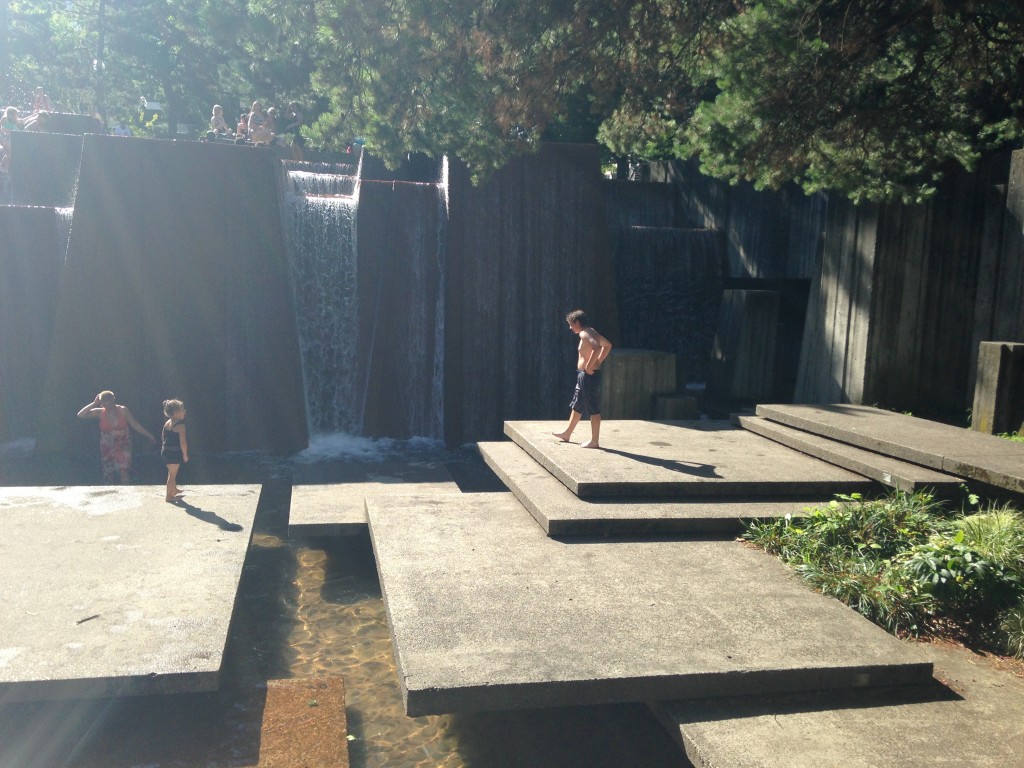 Behind one of the waterfalls is this little alcove, and the next clue. 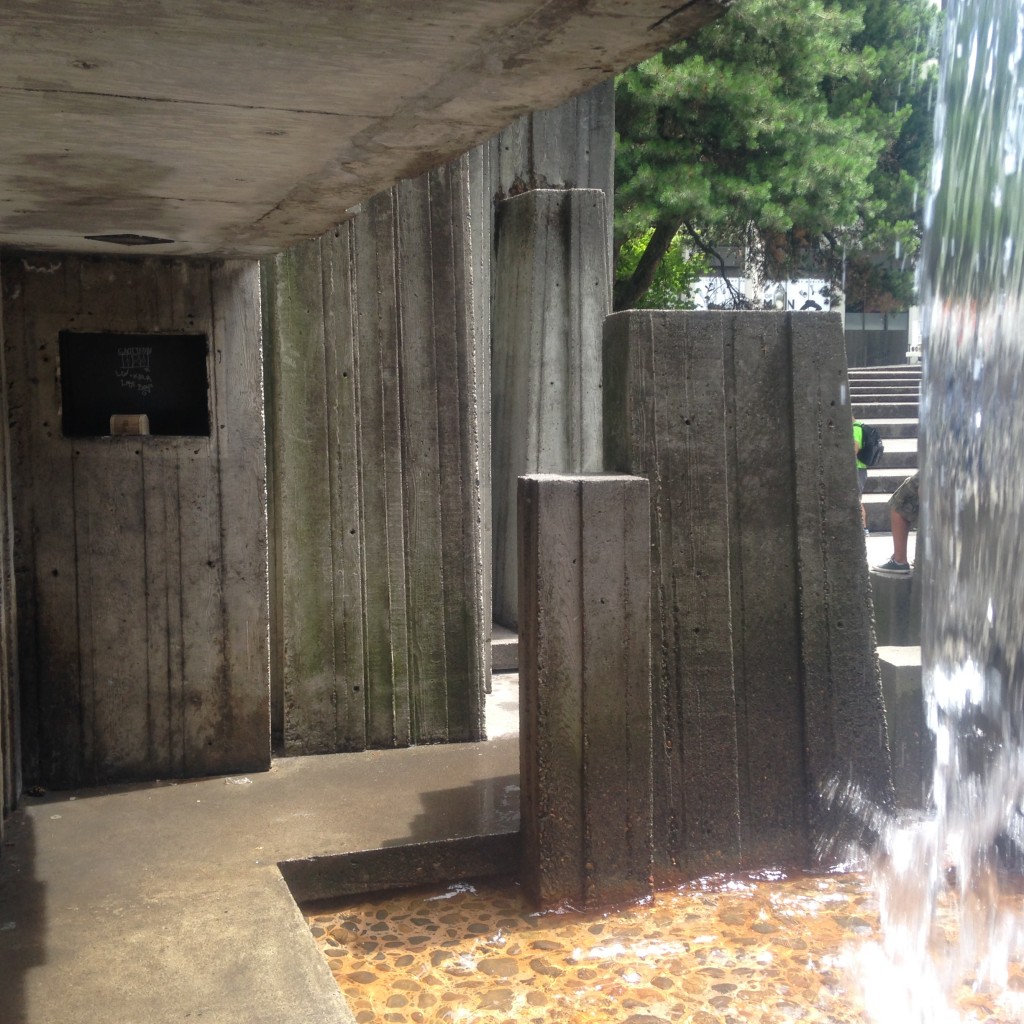 This took a bit of searching, which was really fun. Going to this address leads you to a big courthouse building: 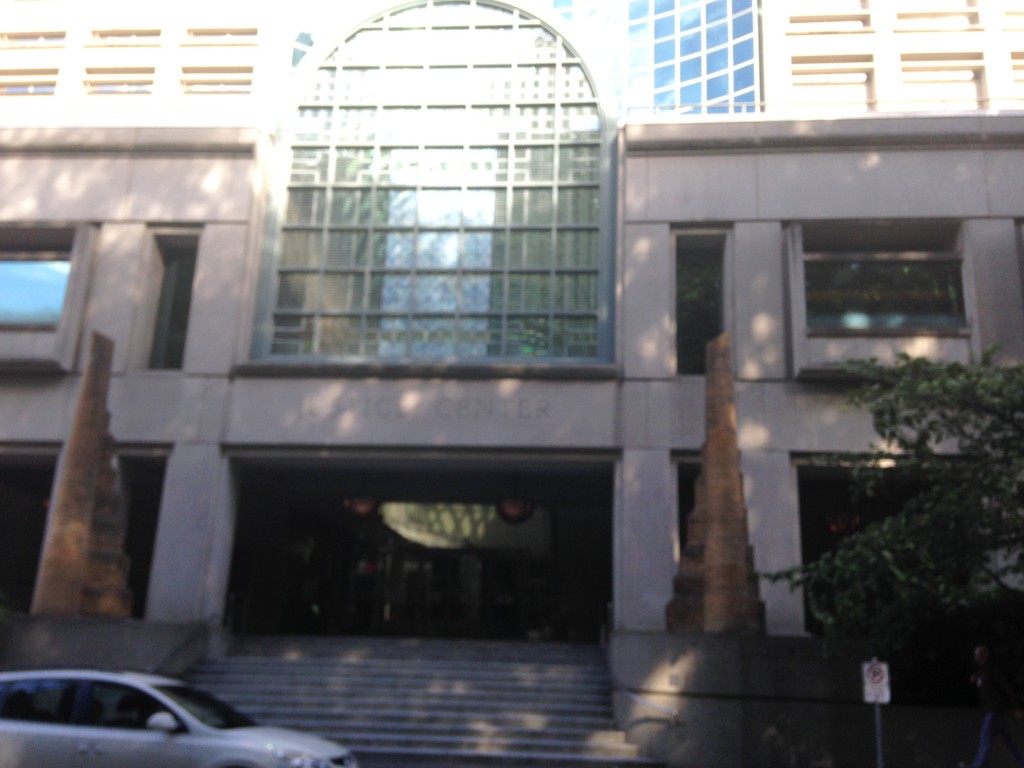 Across the street is another park, with a statue of Pioneers in the center: 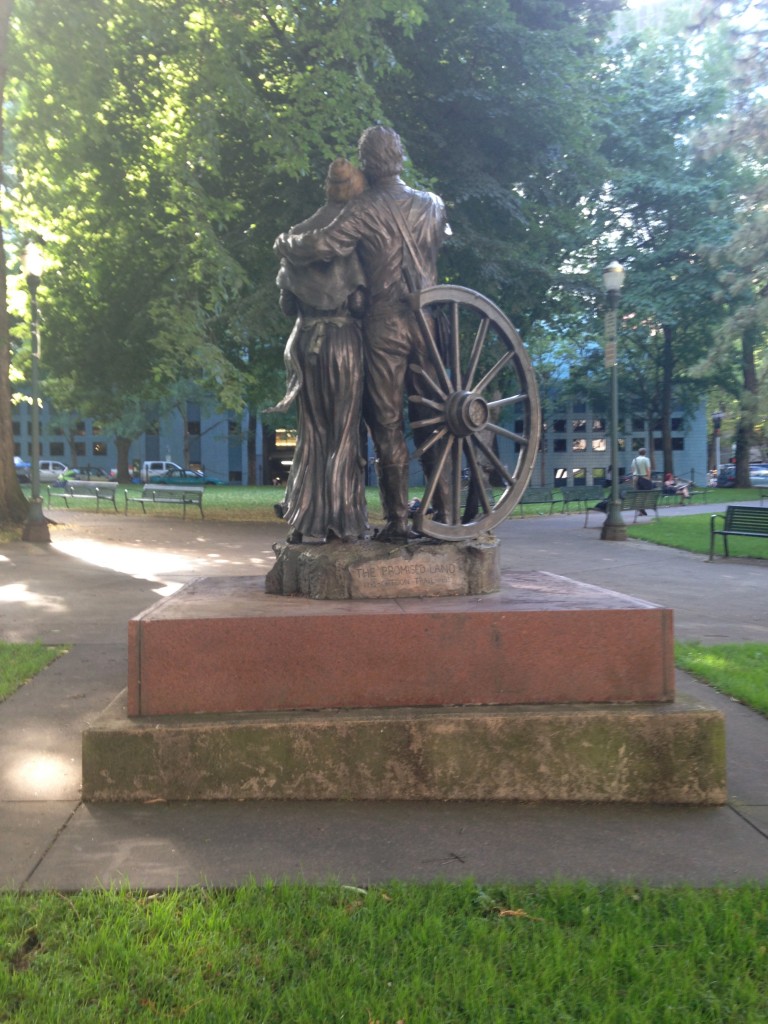 You had to walk around to find the mama, her baby doll, and the chest. A little bit of moderate climbing, with some possible trespassing, and suddenly people feel like they are on a real adventure. 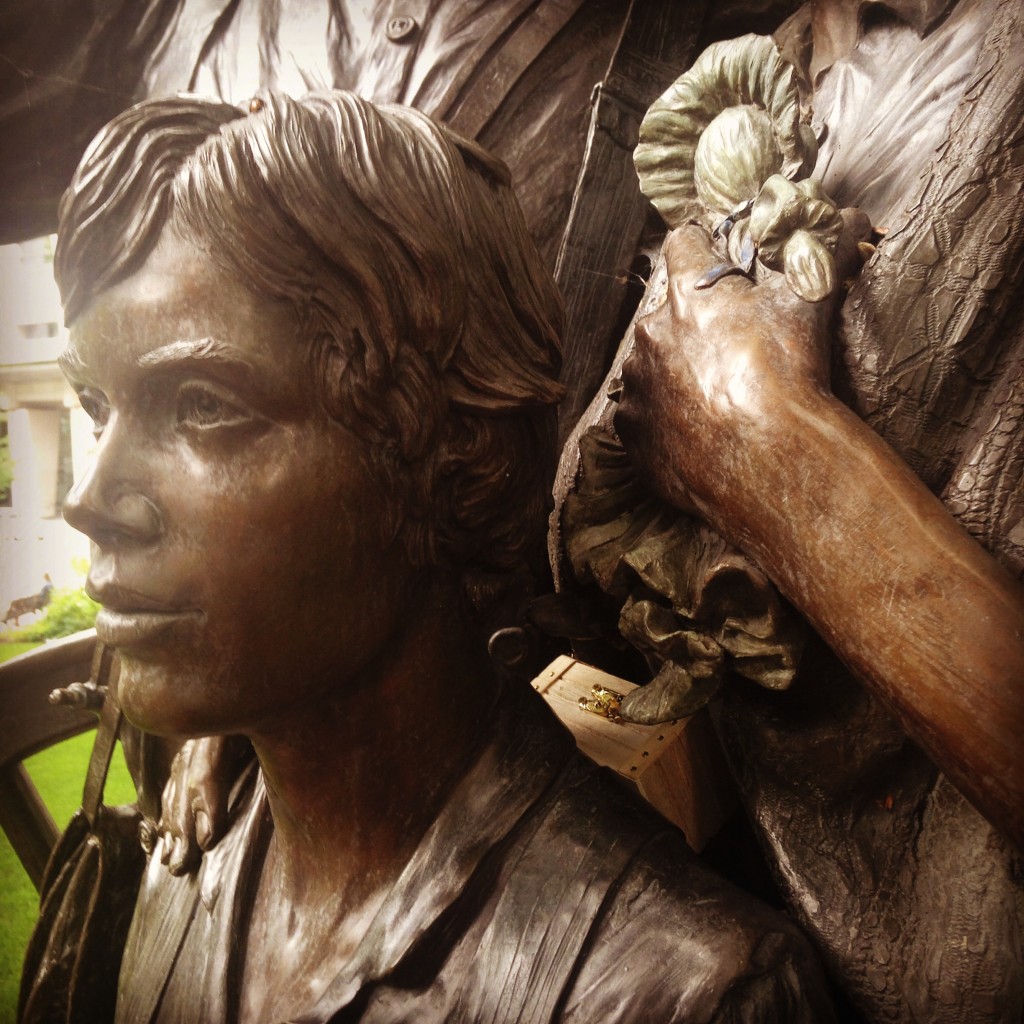 Now, I know you’re probably thinking: what if someone just took the treasure chest and left? Then nobody would be able to continue on the treasure hunt anymore!

I anticipated this, and printed a disclaimer in the lid of every treasure chest:

There were unfortunate tears shed by our furry friends throughout the weekend, but I went around through the whole course a few times a day to replace any chests that had gone missing.

The Portland MAX is a light rail system that goes down SW Morrison and Yamhill avenues. Anyone from out of town could ask any local “What the heck is a MAX?” and get pointed in the right direction. That may give you the location on the streets, but three stories up…that’s adventure. 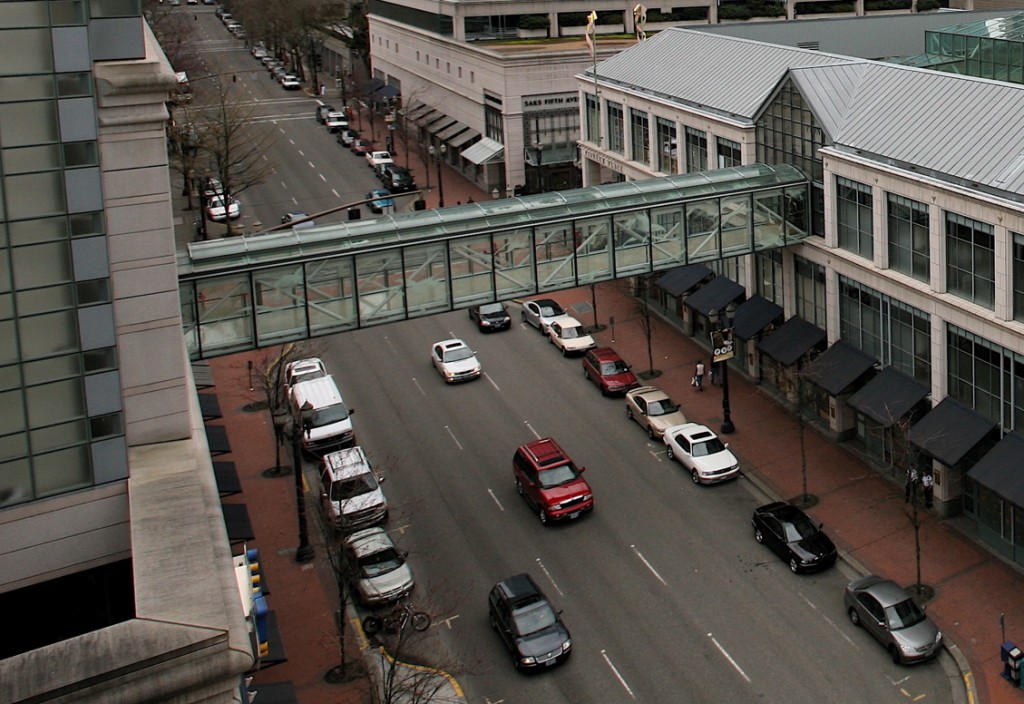 After you got to the location, and went up into the sky bridge at Pioneer Place, it was time to do some good old-fashioned searching. 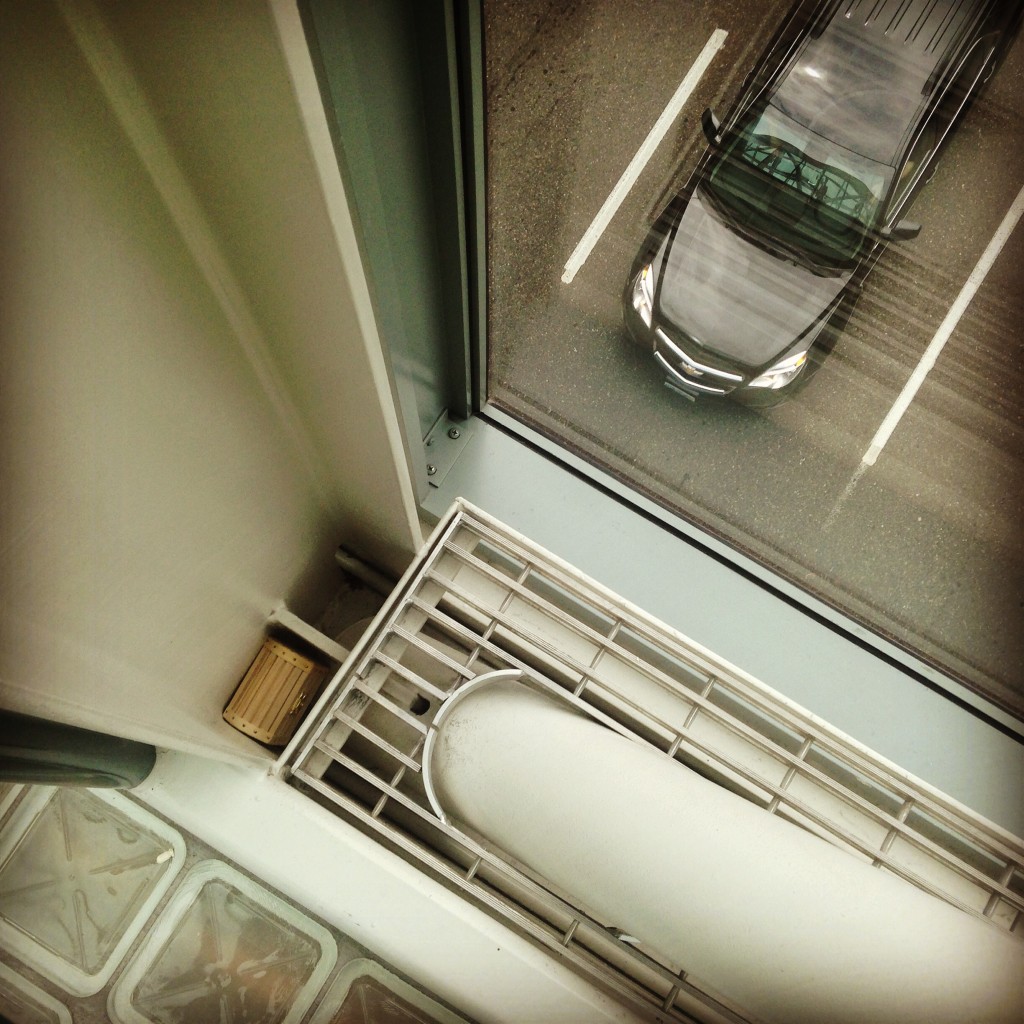 Just around the corner was a big, broad stairway, visible from any corner of the intersection. 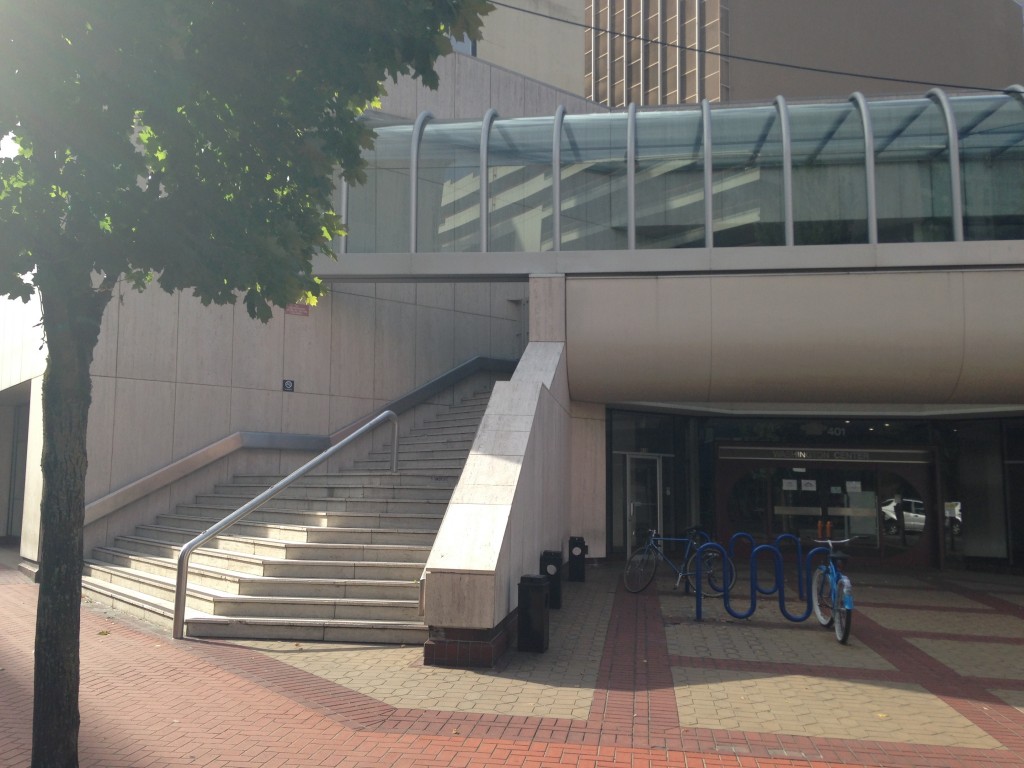 At the top of the stairway was a gate. 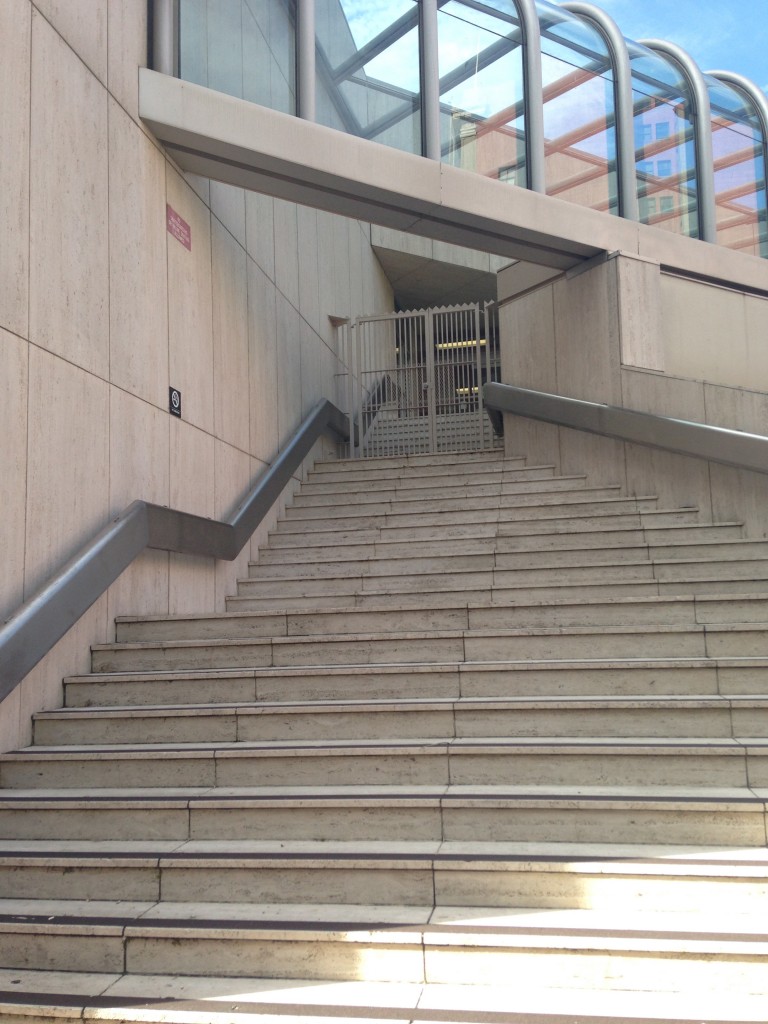 Next to the top of the gate was a discreet little platform, perfect for a treasure chest. 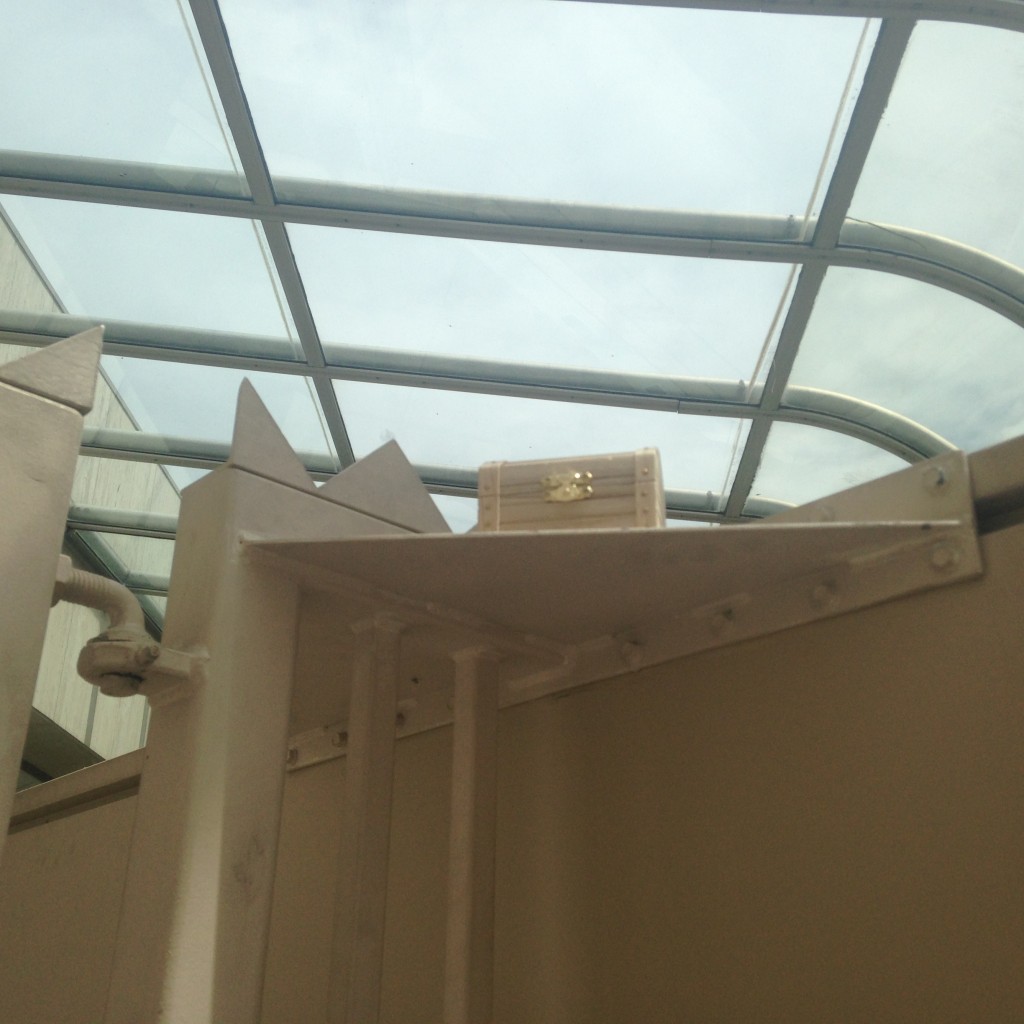 The Portland Mercury is one of our local weekly newspapers. This location was the most stable and secure of all the treasure chests. The next time I do a treasure hunt, I might just use newspaper boxes exclusively. 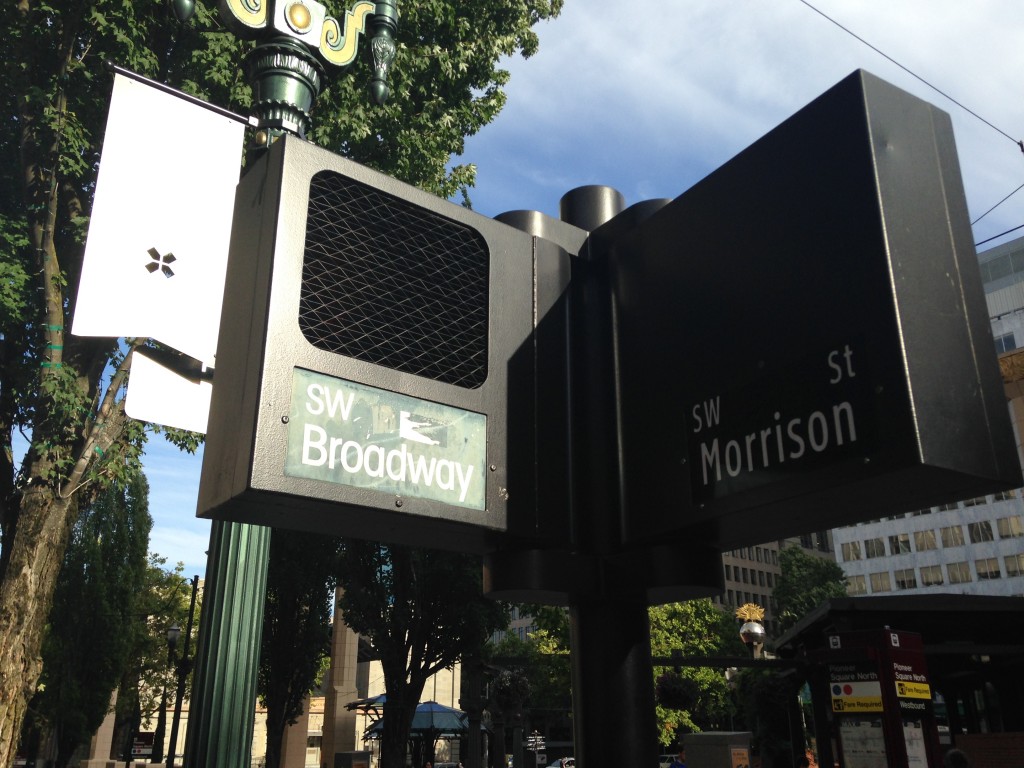 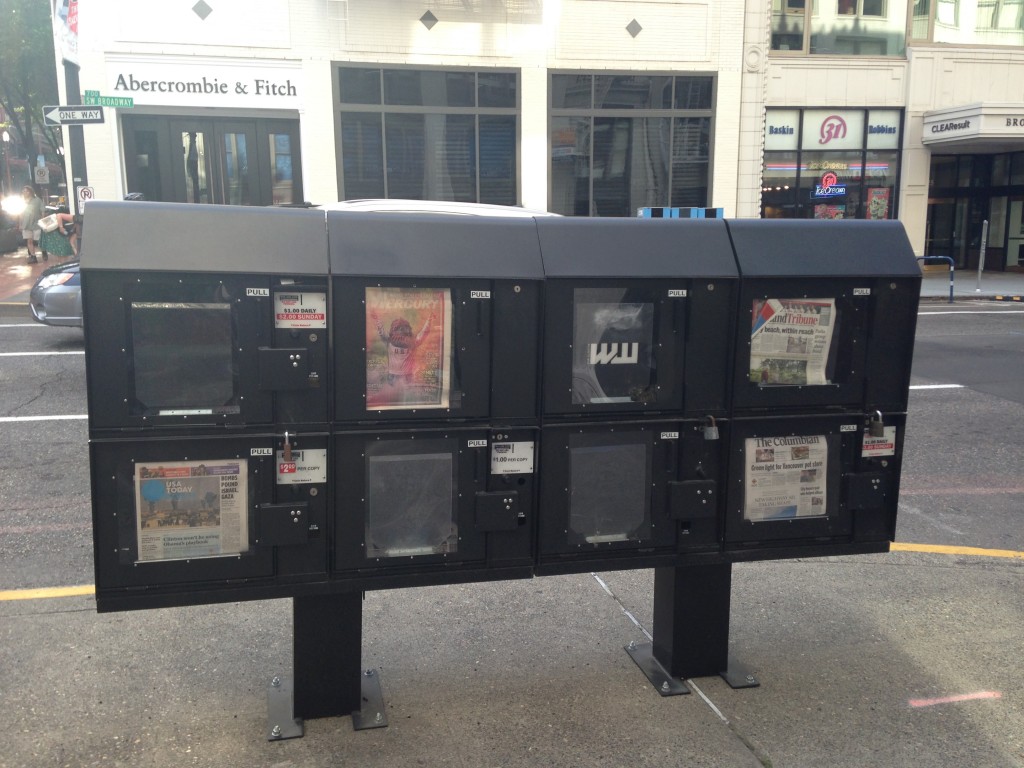 This clue was particularly crafty. I wanted to tie in one of the books authored by Chris Guillebeau, the host of the World Domination Summit. All of his copies of The $100 Startup were checked out from the library, so instead I hid the treasure chest behind the shelf were it would have been. You had to look up his Dewey Decimal to get to the right shelf. 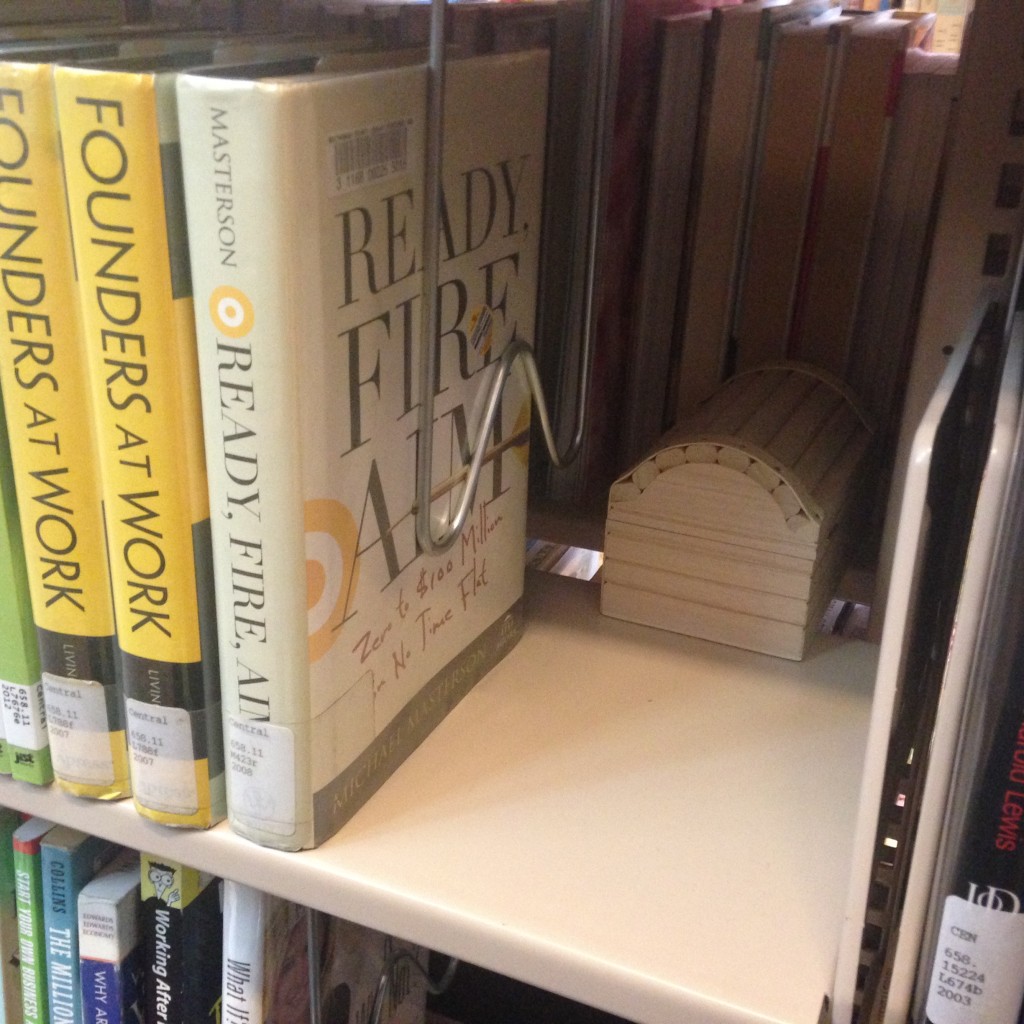 But, wouldn’t you know it, those fastidious Librarians found my treasure chest, and took it away at some point before the Library opened on Sunday morning! When I went to check on all the clues on day 2 of WDS, this treasure chest was missing. Unfortunately, I was also out of extras.

So I went to Powell’s Books, bought a copy of The $100 Startup, and hid the clues inside. 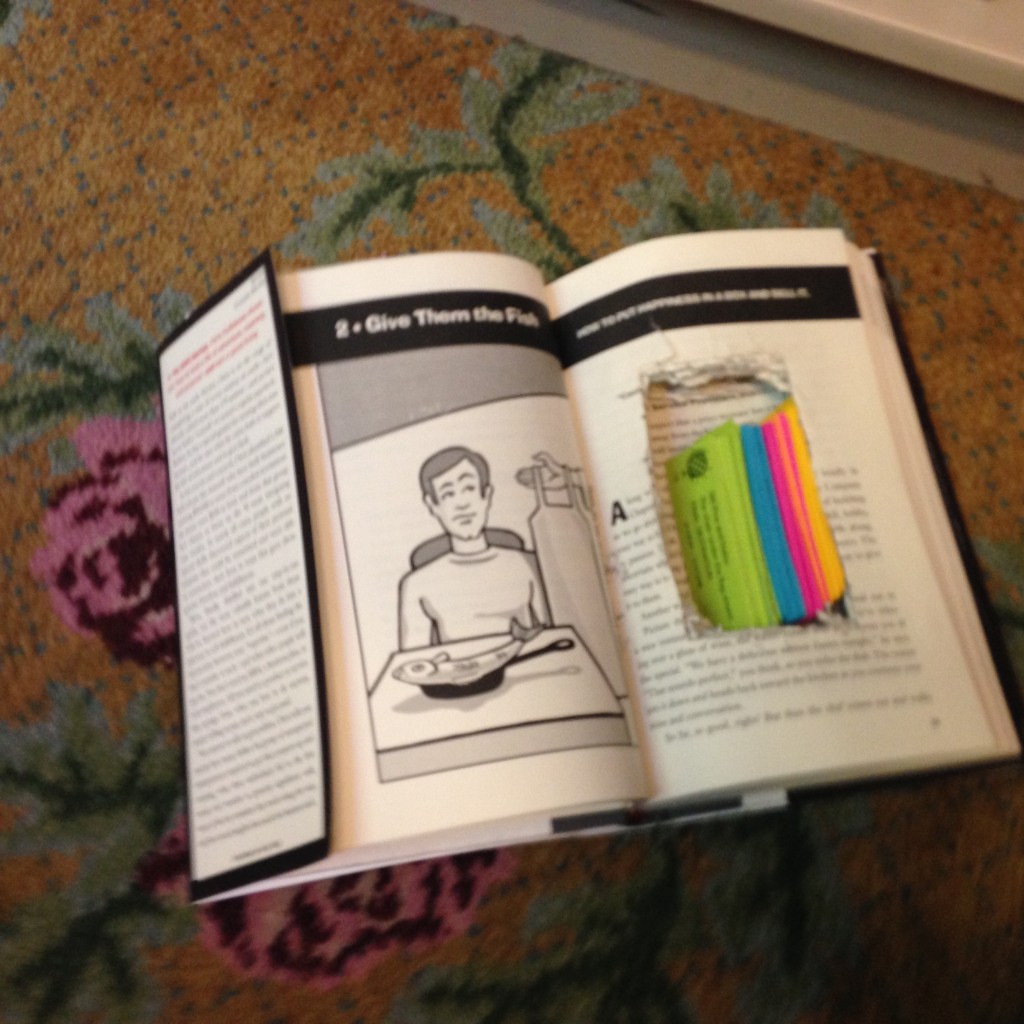 I had been sending out hints and clues on Instagram using the popular #WDS2014 hashtag, and some participants later told me that seeing this photo made them join the treasure hunt, to see why a book was murdered in a library for it.

This final clue was also the most challenging. At the intersection of Pine and Naito, you can see the river and a park on one side, and buildings at the edge of the city on the other. You had to go to the nearby tower landmark and walk around to the river side, and look back at the city, to see the chain or the shield. But once you were on that side of the landmark, it was easy to spot. 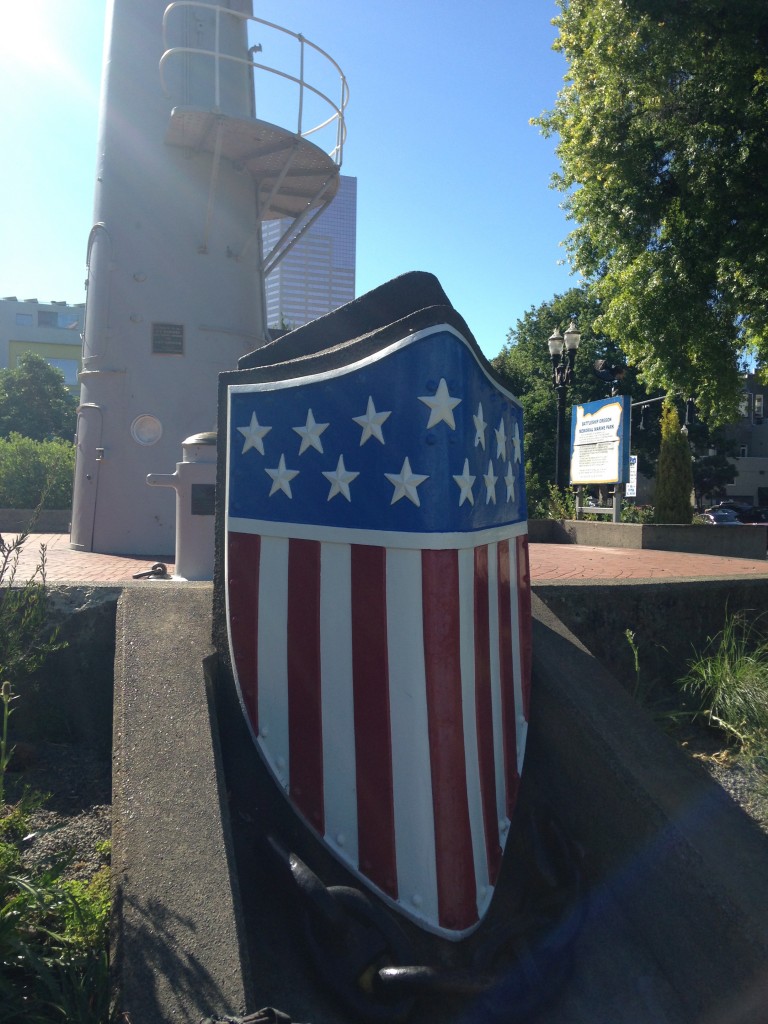 The final treasure chest got nicked, twice, so I had to replace it with an easter egg. 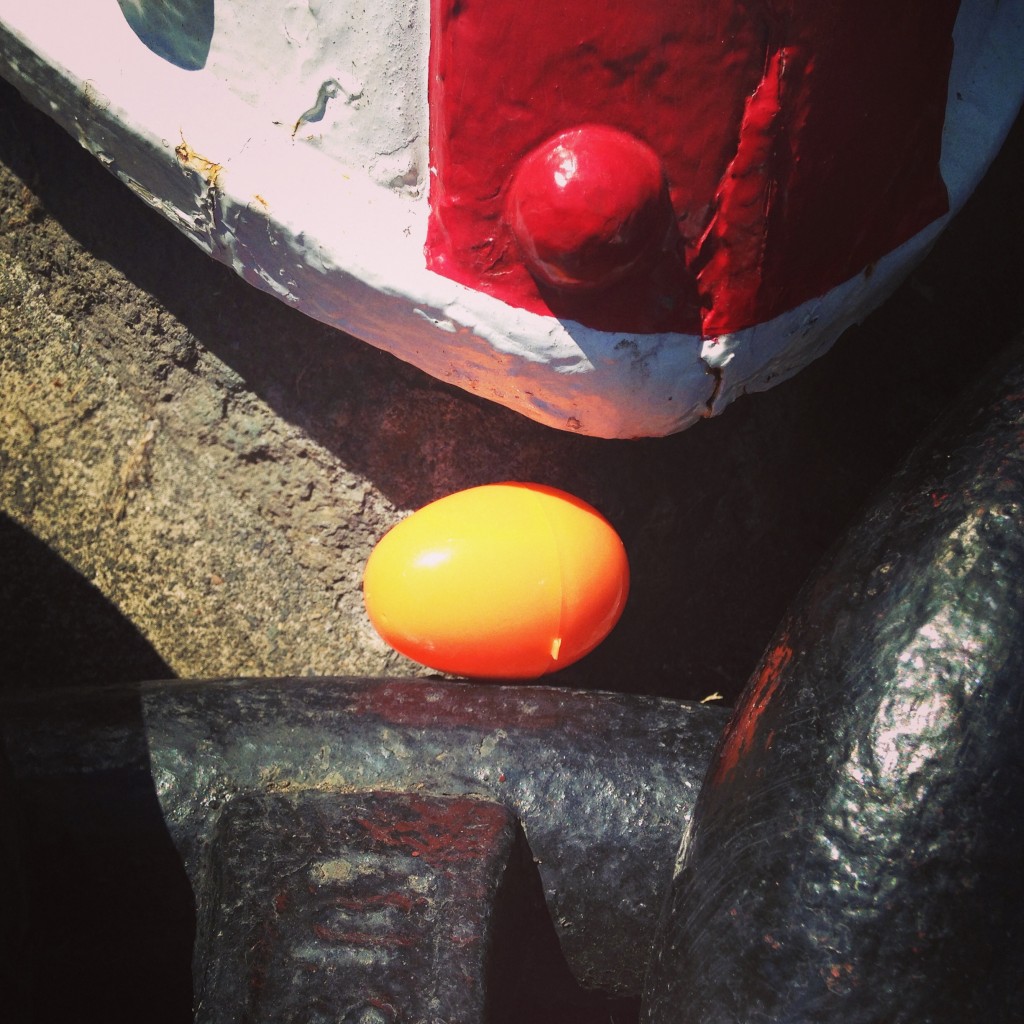 The first person to visit this URL while in the Unconventional Race app got a boatload of points, and everyone after got 25 or so. These were the first winners: 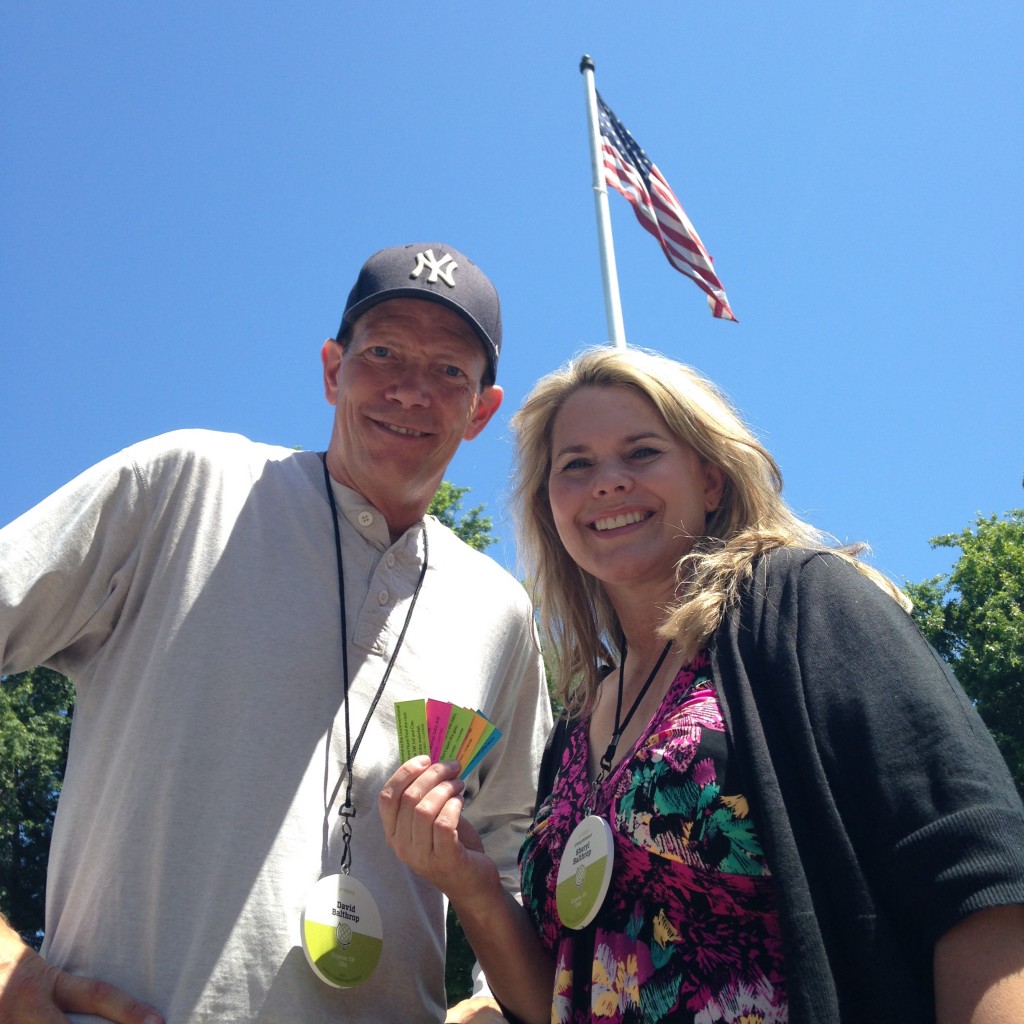 Usually, I like to blog about WDS, but this year I was way too busy and couldn’t do it. (Besides, lots of other people blogged about it, and you can read their posts below.) I did have time to do a quick video while it was still fresh in my mind, and talk about my experience in making the Unconventional Treasure Hunt:

Many Other Blog Posts About World Domination Summit 2014

Related -> How To Make Blog Post Digests with List.ly