‘The Happiness of Pursuit’ Book Review

Chris Guillebeau is a champion of adventure, and his latest book is an analysis of the mechanics of modern quests. 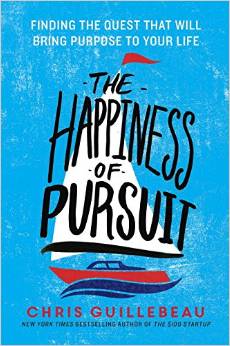 He profiles dozens of adventurous people in his latest book The Happiness of Pursuit, to contrast the different quests they have pursued. Through his chapter-by-chapter formula, he distills the essence of adventure down into something we can examine, and replicate if we dare.

Adventure is one of the three core values of his World Domination Summit, a 3-day conference devoted to Adventure, Community, and Service.

I was drawn to WDS because of the community of adventurous-minded people who were at various levels of the core challenge of the conference: “How do we live a remarkable life in a conventional world?”

The book released last week, The Happiness of Pursuit, profiles many people who have found their own solutions to this question. I just wish it wasn’t a book, but a blog instead.

Chris is an excellent blogger. He was an expert in blogging way back when many people (myself included) were just starting out. His writing style is conversational and approachable, and when he gets into the details of a trip in a remote corner of the globe, as a reader I get really drawn into the story.

His latest book, however, is not one story. It is a tapestry of multiple stories, and I wanted the traditional blog-style support (featured images, links to further information, access to the website in question) easily on hand in the storytelling medium so that I could fill in the missing pieces in my own imagination as I was reading.

Instead, I felt like I was reading a printout of a fairly comprehensive blog category titled, ‘People I know who went on quests.’

The Formula of Quests

The Happiness of Pursuit is a digest of real quests, taken by real people, contrasted against one another to extract the common lessons and insights from all of them.

Many of these insights, when they are revealed in the book, are attached to 3 vignettes from other people’s quests, and this formula makes up most every chapter in the book. After interviewing dozens of real-life questers in the world, Chris categorized them by lessons, and shared a story or two about each quest in order to provide examples for each chapter’s main lesson about quests and adventures.

I must admit, reading through this formula felt like a chore.

There were many interesting people profiled in Chris’s book, and as I write this review, I can’t remember a single name, and have only hazy recollections of any of their stories or their quests, because the stories told only revealed their most superficial layer.

At most, the reader is treated to a tiny slice of each adventure, served alongside similar tiny slices, so that we can sample a sliver of each without actually sinking our teeth into anything.

After introducing a character, Chris would lay out the basics of their quest, and maybe move into a challenge that they faced, and then introduce a new character in the next paragraph to get on with the comparison.

I found it very difficult to relate to any character in the book, because as soon as I would become emotionally hooked, we would move on to someone else’s ordeal, someone else’s adventure, and the emotional investment in the character I was reading about would vanish, as I tried to gain my disoriented footing and figure out who we were talking about now.

By contrasting different quests, he is able to offer exhibits A, B, and C in support of the thesis of the chapter.

As a reader, I found myself unable to maintain immersion in any story because I was continually trying to get my bearings about the new story we were in.

(Much like a traveler in another unfamiliar culture, able to only align similar stories and adventures of the past as anecdotes to use in interpreting an entirely new situation. Well played, if it was on purpose.)

The Journey and Not the Destination

Chris is a perfect moderator for a digest of quests, having taken on (and completed) an epic quest that was documented on his blog, and earned him the core of the massive following he has today. He traveled to every country in the world, 193 in all (hence his Instagram handle, @193countries.)

His quest has served as the platform for his authority and awesomeness, and gives him the experience and insight to look into other people’s quests and see what questing is all about, why we do it, and why quests are important to a purpose-driven life.

The chapters were occasionally broken up by Dispatches, short 2-3 page mini-chapters in all italics, which were direct accounts of a leg of one of Chris’s own journeys on his own quest.

Describing his own journeys in Dispatches is the writing where Chris really shines, when he takes us through the hills of Italy as he is sleep deprived and his rental car is falling to pieces.

This was the Dispatch that encapsulated my disappointment in the book. He was trying to get to San Marino, a tiny enclosed mini-country that he could check off his global list after an overnight flight and only 2 hours of sleep. Getting to San Marino took four hours, and every challenge he faced drew me deeper into his story: running out of gas, feigning ignorance when a tollbooth operator wanted a bribe, driving off and getting in an accident, and when he finally arrived in San Marino…

…I turned the page and he was on the way back to Rome. I presume later that afternoon, or maybe after sleeping, he left, and he wrapped up the story with an insight on quests that left me completely unsatisfied.

“What the hell happened in San Marino?”

The object of the quest, the meat of the matter, the goal and the prize, was totally missing from his narrative.

And this was what happened throughout the whole book.

Instead of taking us along on a quest, he composed for us a series of vignettes that illustrate some finer points about the theory of questing, while not letting us actually tag along on any one full quest ourselves.

However, there are plenty of variations on The Hero’s Journey that we can read, in many books, and on many blogs. The Happiness of Pursuit is not an adventure romp; it is an academic work, the first thesis of quests as a condition of the human experience.

This book made me realize: Chris has two audiences.

The first audience is made up of people who have had their “defining adventure.” These are the people profiled in this book, the ones who already live unconventional lives, and make WDS such an interesting and engaging community.

The second audience is everyone who wants to become unconventional, people who are ready to discover their defining adventure, and who believe they have it within them to break out of the mold created for them by society.

The Happiness of Pursuit is a book written about the first audience, and written for the second audience.

The term “defining adventure” came up during a conversation I had with Joshua Waldman, when we were at a post-WDS gathering of Portlanders. He’s been backpacking through Nepal. I’ve been a hitchhiking street musician, and I’ve climbed a bunch or Portland bridges dressed in a superhero costume. We are adventurers, and WDS is a community where we feel at home.

As we looked around, we saw 2 crowds mingling: there were people who had completed a defining adventure, like us, and we held the space for this culture; but there was also this other group, just as important: the interested people who were still in cubicles, but looking to learn how to break out and become what AJ Leon calls a misfit, what Jonathan Fields calls a career renegade, what Jonathan Mead calls a trailblazer.

Many bloggers and authors call this new segment of our culture by many names, and nobody has really settled on one definition yet. I asked Chris Guillebeau once, at the grand opening of Hatch, “What do you call these people? How do you define them?”

Whether we are ultimately named as non-conformists, or freethinkers, or misfits, or self-dominant, there is one thing that bands us all together: our defining adventure.

If you are searching for your defining adventure, there is no better practical manual to find it than The Happiness Of Pursuit.

If you have already found your defining adventure, leave a comment below: what was it?

“Digital Engagement Workshop” airs on Thursday, 19 August. Register for this Masterclass and I’ll send you the replay if you can’t attend - as well as a copy of my Zoom Host Checklist. — Click Here