It is much easier to find an existing audience than to carve a new one out of the crowd.

Your future customers are already congregating somewhere. Go there and be valuable, make relationships, and gain customers. 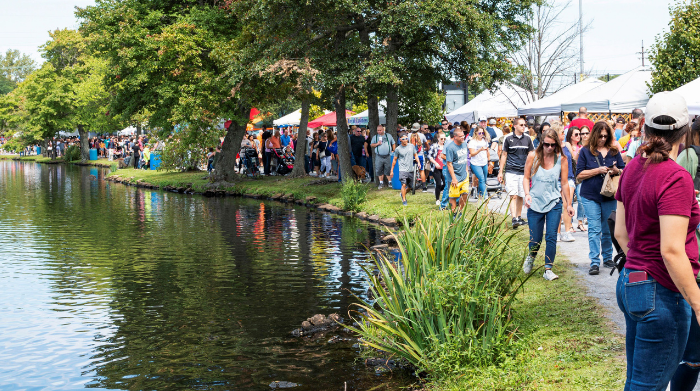 Photo by WoodysPhotos on iStock

I think of marketing myself like I am a vagabond peddler. I have a selection of interesting trinkets in my bag. Going from village to village, I make trades (and offer value) that villagers don’t often see in their little town.

But I don’t start a new village myself.

Starting a village requires a lot of other skills. You have to find the right piece of land, make it habitable, and entice people to come and join you.

That’s not in my skill set. Building a new audience is difficult, and it can distract you from doing your best work.

You can conserve your time and energy for your best work if you can identify an existing audience where people are already congregating together.

How to find communities of warm leads

If you have a good Lead Magnet, you have a small, digestible problem to solve for your audience.
What groups and communities would find your Lead Magnet valuable? Where do they congregate? Who do they look up to as a leader?

Find the leaders of existing communities, and make relationships with them. Subscribe to their newsletters, comment on their social media posts, and find a way to be valuable to them.

After you have warmed up the leader, make an offer to talk with their community. Share the same knowledge in your Lead

Magnet, in more depth and detail. Provide the Lead Magnet to everyone who attends, and you will have a collection of warm leads.

Marketing yourself doesn’t have to be hard, if you find existing audiences where you can provide value.

The general public doesn’t care about you

If you want, you can stand on a soapbox outside of the train station. You can broadcast your message loudly to all the strangers that pass you by.

Lots of people will ignore you. If you are lucky, you can distract a few into paying you some attention.

Many of us start our businesses this way. We hope that somebody in the sea of nameless faces is going to hear our message, get interested, and step out of the crowd to talk with us further.

We market to everybody, in the naïve belief that our services are applicable to anyone. Out of fear of leaving people out, we make our message as general (and generic) as possible.

You can generate higher quality leads in smaller groups

It is much easier to be a guest expert at an association meeting. This gives you the complete attention of a small room full of people in your target market.

The types of customers you serve, they belong to groups of similar people. They pay dues for something. They brainstorm with other people like them, trying to figure out how to do what you do.

The further you niche down, the easier it is to find your future customers.

Case Study: Marketing Yourself During A Downturn

In 2009, there was a huge economic downturn in the United States. Automobile sales went through the floor so badly that they had to be bailed out by the federal government.

This was especially bad for luxury car brands. While automobile sales were down across the board, luxury cars were not selling at all.

There was a salesman for Lexus who was tired of sitting around at the dealership and waiting for nobody to show up. He decided to go to where his customers were already were congregating: the golf course.

He drove a brand new Lexus, and he would wander around and talk to people in the pro shop. These were people in his target market who had some time to relax and chat.

He would ask them, “Hey, have you ever driven a new Lexus?” And if they said no, he’d say, “Would you like to take one for a test drive? I have one right outside.” And they would go on a test drive together.

When they got back to the golf course, he would make them an offer: “How about we trade cars? You take this Lexus home for a week, and I’ll take your car home for a week. After a week, we’ll trade back.”

After a week of driving a brand new Lexus, his prospects got back into their old cars. They seemed dingy, after driving a brand new car around for a week. When the car salesman called back a few days later, his warm leads were often hot leads. He made plenty of sales during one of the worst economic downturns in a decade.

How? He targeted his lead generation to an existing tribe. He spent time making relationships, and offering free value, at a golf course.

He didn’t take out Facebook ads, or stand on a soapbox at the train station, or call everyone he knew. He went to a place where a tribe of his customers were already congregating.

The 4 Temperatures of Leads

Every lead falls into one of 4 categories:

A hot lead is ready to pay you. When you want some money, go talk to your hot leads.

A warm lead has gone through most of the 4-step Marketing Cycle — they know, like, and trust you. They are ready to hear a pitch.

A cool lead was once warm, but enough time has passed that they are not ready to hear a pitch. They need to warming up first.

A cold lead may match your Customer Avatar, but they do not know, like, or trust you (yet).

Many new entrepreneurs collect all the cold leads they can, and try selling to that list without warming them up first.

Smart entrepreneurs find communities of warm leads. Building relationships in their existing communities is a cheat code to fast success.

The general public, as an audience, has a high cost to reach. There are a lot of people in a general audience. Reaching so many people (and sifting through them to find the good leads) takes time, money, and resources. The general public also requires more education in order to make a buying decision. 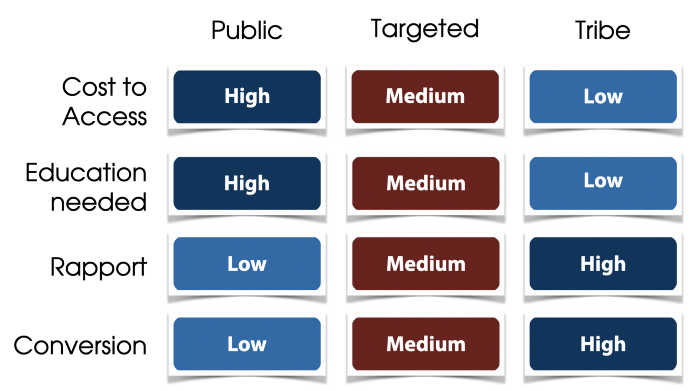 Graphic by the author

Segmented email lists have a 39% higher open rate than general email lists. They also have a 28% lower unsubscribe rate. In my digital marketing agency we compared email deliverability between lists targeted to a specific niche vs general opt-in lists. Targeted lists had a 24% increase in deliverability.

Focusing on targeted audiences of existing tribes makes it easier to build rapport, and convert strangers into customers.

I love what Seth Godin says here, but I take issue with his word ‘assemble.’

For ‘smart organizations,’ this makes sense. An organization has resources and staff to carry out its demands. But many small businesses and solopreneurs do everything on a shoestring budget, learning as they go. Making mistakes is expensive, and assembling a tribe is a big undertaking.

An existing tribe does not need assembling. You just need access.

Existing tribes require less education and convincing about your offer, too. Being introduced by their leader, someone they trust and respect, gives you instant credibility. The cost of targeting a more specific audience is also going to be much lower. You’re not trying to reach thousands of people, you’re trying to reach dozens in a small group, where they already meet.

How can you access a tribe of targeted leads?

If you can provide value to an existing group of targeted potential customers, you will be a lot more successful than trying to yell your message out to the faceless crowd.

Make a list, right now, of 4 existing communities where you can find your target market. Spend some time being valuable in those communities this week. See if you can make a relationship with the leaders of those tribes.

Find the villages where you would be welcome, and go spend some time there, sharing what you know. This is an easy cheat code to success.

This is an excerpt from my upcoming book, ‘Marketing Yourself.’ To get notified when the book is released, sign up for the waitlist.