No enemies, no drama, and a new place to live.

This is a story about a pedophile I never knew, a landlord I once called a friend, and a family of gypsies escaping into the night.

“This is what gypsies do,” my wife said to me as we were packing our sparse possessions into a small caravan of modern-day gypsy wagons. “They pack in the middle of the night, so nobody knows they are leaving.” 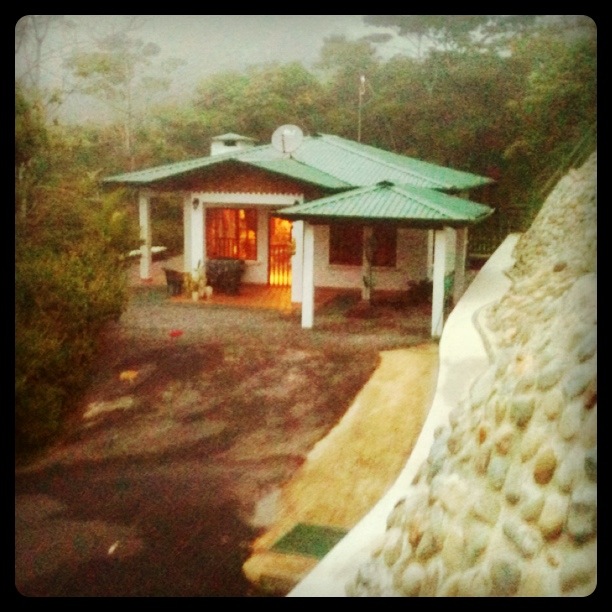 I never wanted to leave Summerland. We lived there for two years – our son was born there, and we have many fond memories of that mountainside.

But when a pedophile takes an interest in your family – it’s time to move on.

There’s this guy called El Pelón. He has been sneaking around the pueblo of Alto San Juan for years, peeking into people’s windows. Our housekeeper said that he has been spying on her since she was a little girl.

He started coming to our house quite often, even after I would chase him off with my Rottweiler. He would knock on the bedroom windows where my kids were sleeping, and whistle through the bathroom window at my wife.

When I told this to my car mechanic, on my last day in town, he said, “Alguien necesita matalo.” Somebody needs to kill that guy. A surprising response for a Tico – they are normally passive, peaceful people. But this big mechanic shook his head and spat. “Un pedifilo – necisita matalo.”

“Es posible,” I replied, “pero yo no estoy el hombre por eso.” Maybe, but I’m not the guy for that.

Never make enemies with someone you do not think is rational.

Drop it and get out of their life, no matter what it takes. Trust me on this one – the perils of transgressing this law can be monstrous.

“Donde vive él?” the mechanic asked me. He wanted to know which side of the road El Pelón’s fruteria was on, so he could pay him a visit.

So I told him. Maybe, having a big (and surprisingly angry) Tico show up and chop some bananas with his machete would make an impact on El Pelón.

But for me – no soy el hombre por eso.

Had I shown up at El Pelón’s fruteria (which is on the left side of the road going to Dominical, just past the turnoff to Pacuarito, for anyone who cares to know) and waved my fists around, and told him to stay away from my family, then, I’ve made myself an enemy.

An enemy who was once found naked in the girls bathroom at the local elementary school. An enemy who likes to visit my house in the middle of the night, and knock on my windows, and keeps coming back even after being chased off by a big Rottweiler. An unpredictable enemy, who could visit lifelong harm upon my family.

Rather than make an enemy, I holed up behind bars. In doing so, I may have lost a friend.

In addition to renting the 2 bedroom house at Summerland, we also rented 2 studio apartments – one for each of Johanna’s parents.

One of them was out of town, so we moved 2 adults, 3 kids, and 2 dogs into the small studio apartment, because it had bars, and we felt safer. The big problem wasn’t the confined space – it was how much the landlord didn’t like us being there. Her office was in the same building as the apartments, and my kids are – kids.

They cry, and throw things, and like to race their dump trucks and laugh really loud, and it made my landlord really unhappy.

She made sure to show us how unhappy she was.

When toxic sewer gas started coming in through the bathroom, it took her two weeks to fix it. She suddenly decided to install solar panels on the roof, so we had workmen stomping on our roof all day, which agitated the kids and dogs, and made more volume all around. (I think that one kind of backfired.) Her mom came and rummaged through our stuff and took a bunch of our things, and not for the first time. And then, she wanted a 50% increase in rent to stay at the apartments.

I tried to take her out for breakfast, or for an afternoon drink, to talk it out, and find a solution that would make everyone happy.

Instead she kept all communications through email, and ignored us when we waved hello to her.

I do business with friends frequently enough to know that if business deals get strained, you can return to the friendship to find common ground, and work it out to everyone’s benefit – unless the friendship is only there for business.

I remember all the fine times and bottles of wine we had, back when my landlord thought I might be interested in buying a piece of property there. When I let it slip that we didn’t want to own anything, but just wanted to rent, we stopped seeing her so much. And then, when we became problem renters (because we wanted to feel secure from the peeping tom that had caused other renters of hers to leave) she ignored all attempts at rekindling the friendship.

I’m sad to leave one of my favorite places that I’ve ever lived, and I’m sad that I lost a friend in the process. But things were becoming very dramatic very quickly, and I have a longstanding policy against allowing any drama into my life.

The turning point, when I realized we would have to pull up stakes and go, culminated in a cockroach. 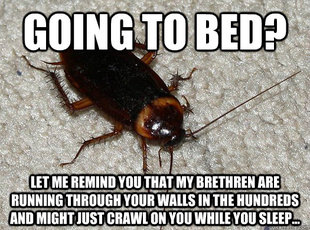 It wasn’t the first cockroach I had seen at the apartments, or even the biggest. But he showed up at exactly the wrong time.

I had just finished holding my breath while using the bathroom, to avoid inhaling the sewer gas. (Holding breath while urinating = not so fun.) The hot water in the sinks was so hot that it regularly gave me first degree burns, and I had just gotten another one. We had just been asked to pay increased rent to offset the costs of improvements made to property we didn’t own. And then, while putting the kids to sleep, I saw this huge cockroach the size of my thumb climbing on the curtain.

I looked at that cockroach and thought, “What the hell am I doing here?”

For so long, I had stayed overly optimistic about the place, because there were parts of it that I really did love. But the owners of the property didn’t want us there, everything was going wrong, and once I allowed myself to stop justifying everything that was happening, I could acknowledge it as a problem that I could solve, by leaving.

Sometimes, the most healing thing you can do is walk away.

We went up to the Central Valley for a weekend to look at some possible places to rent, and sure enough, serendipity guided us to the perfect home.

Within the next 5 days, we packed and settled our affairs. I wrote a long breakup letter. When everything and everyone was packed into our caravan on Friday morning at dawn, I opened my laptop, hit ‘send,’ closed it up, started the car, and drove away in true Gypsy style, with no one the wiser. 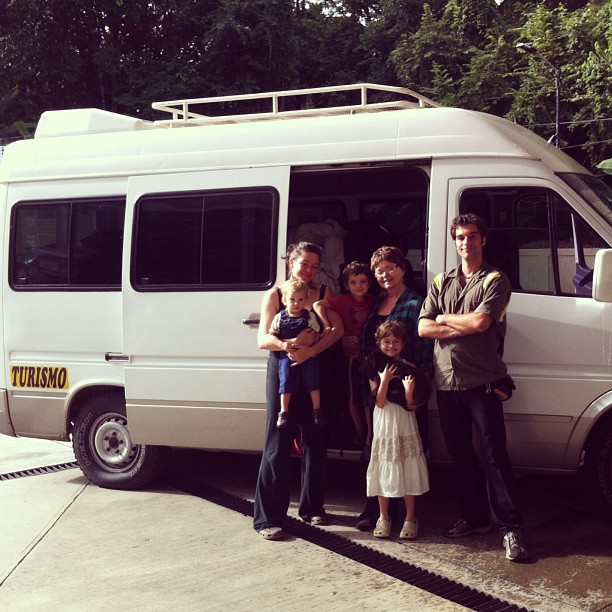 The Huntress Clan, with all our worldly possessions.

When I tell this to other parents, they are surprised that we stayed as long as we did. But, like I said, I really loved the place, and I was willing to put up with a lot in order to stay.

Except for drama. When things get dramatic, and the players are more set on being angry or right than they are willing to talk about it as friends, that is my cue to exit.

Leaving broken situations for the unknown is an art. I have found that the currents of fate will give you signals, and if you are sensitive enough to listen, you can ride these currents to a better life, with frequency.

Our new home in Grecia is a 3000 square foot villa. It was owned by Americans who raised their children here, and it was designed with a family in mind. 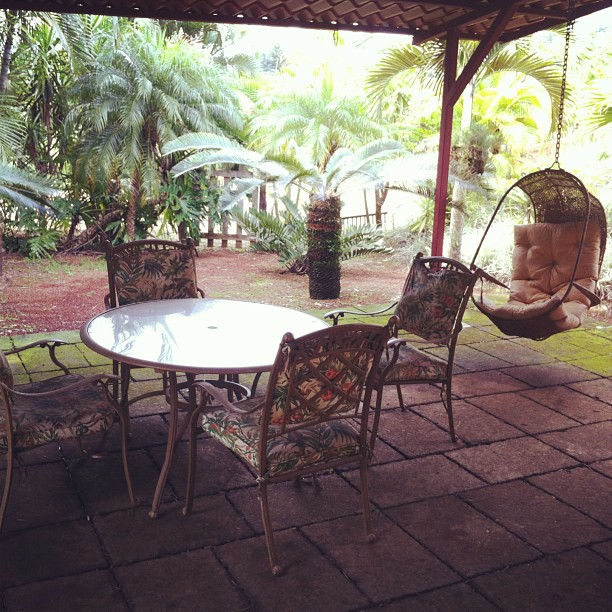 The furnishings are such a huge upgrade. We had to beg and cajole for months to get a couch at Summerland, and we were rewarded with the most uncomfortable futon I have ever sat upon. Here, in Grecia, I actually have to stop and look around to take a count – 3 couches, all of the durable high quality that rambunctious kids can climb on.

There is a gate and barbed wire fence surrounding the property, and we have good views next to a creek. The owners live in the United States, instead of right under us, and there is a really nice Tico that acts as the landlord’s agent, fixing anything that goes wrong.

We have seriously upgraded our situation, and we are paying less in rent than we were before.

This is the biggest lesson I have learned about life: when bad things start to happen, accumulating in frequency, it serves as a notice that something foundational in your life needs to change.

Nowadays, my family does not fight against our misfortunes. We recognize them as signposts, indicating that something unexpected is about to change, and if you allow it, your life will blossom as a result.