“Gratitude is the single most important ingredient to living a successful and fulfilled life.” – Jack Canfield

Without gratitude, life is just bleak. You can be rich or poor, healthy or sick, lonely or loved, but only appreciation will assign value to that which you possess.

James Clear, an expert on making habits, uses the power of small habits to cultivate gratitude every day of his life. His habit is so simple, it can’t fail to work. Each time he sites down to eat, he thinks of one thing he is grateful for. That’s it. 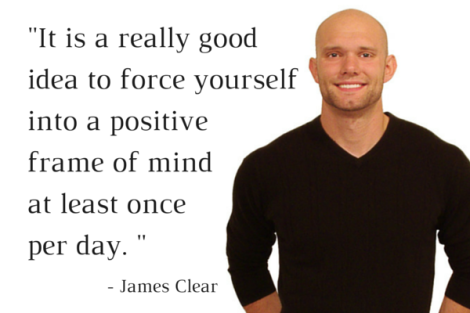 Everyone has bad days and frustrating moments, myself included. But no matter what happens each day, when I sit down for dinner I am forced to think about the good in my life for at least a few seconds. The result is that there is not a day that goes by without me specifically stating something positive that is happening around me. Positive thinking opens your eyes to more opportunities.

Adventure czar and habit hacker Tyler Tervooren offers some really good ideas to link your habits to each another. If you already have a habit, stack new habits on top of them, in a “habit ladder,” to make your new habit automatic. 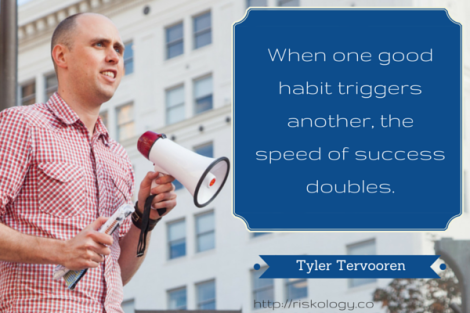 If you’re working to cement new habits but having a hard time, it could have less to do with the habits themselves and more to do with how they’re arranged. Try looking at each from a perspective of the habit loop—cue, routine, reward—and find opportunities to rearrange them so the reward—or tangential result—from one helps to create the cue for the next. That’s how success becomes automatic all day long.

How A Gratitude Habit Changed My Life

In his classic manual of positive thinking, The Greatest Salesman in the World, Og Mandino provides a habit-building format with ten ancient scrolls that are bequeathed to the protagonist. The instructions for using these scrolls are simple, but it takes mighty endurance, or clever habit stacking: you read one scroll, three times a day for thirty days, and then move on to the next scroll.

In 2009 I accomplished this feat, and it was shortly thereafter that my life began to radically change. At the time I was selling car insurance, wearing a tie to work every day, and I almost never saw my family. I had two kids under the age of four, and on my one day off for the week, we drove together past the tall, gleaming office tower where I spent most of my days.

My young son pointed up to the sky and crowed to everyone, “Look! That’s where Daddy lives!”

That was a pivotal turning point in my life. My son didn’t think I lived with him at home, because I always left before he woke in the morning, returning most nights after he went to sleep. I saw him in brief pockets of time on Sundays or the odd afternoon picnic in the park, but I was not a regular part of his life; I was a visitor.

My wife was running her own business, and after caring for the kids all day long, the only time we saw each other was when we were both exhausted. We were living, but it wasn’t much of a life.

So I started counting my blessings. I felt deep gratitude for the time I spent with my family, while we were together, and while we were apart. I read the ten scrolls of Og Mandino with dedication and diligence.

Starting this gratitude habit wasn’t easy to stick to, at first, so I looked for places in my daily routine where I could slip this habit in automatically. There was one thing I already did morning, noon, and night: I got in my car.

My job involved lots of driving, so I tucked my xeroxed copies of that month’s scroll into my glove compartment. Every time I sat down in the driver’s seat I read these words of wisdom out loud, and placed one more check mark on the back of the paper, tracking my activity (like a good salesman should).

By keeping to this habit of gratitude, my life began to rapidly change. I became a superhero. I moved to Costa Rica. I changed careers, leaving the office safari where I had lived and worked for so long, and gained a new and rewarding vocation building websites.

None of these changes would have happened, I am convinced, if it were not for the diligent practice of gratitude.

Join the Work From Home LAB

This is my free Facebook community where remote workers can connect, collaborate, and ask for feedback from their peers across the world. — Click Here

“Work From Home Like A Boss” airs on Wednesday, 8 April. Register for this Masterclass and I’ll send you the replay if you can’t attend - as well as a copy of my Work From Home Toolkit. — Click Here